Spot prices fell slightly yesterday with improved renewable energy production the main driver of prices; with wind and solar capacities going up by 4GW. The UK gas system opened long this morning and NTS demand is expected to be lower in the next few days and supplies should remain healthy as a result. Spot prices should see a decrease although Front-Month is expected to make a significant gain. Today's prices can also be found in an easy to read table on our 'current UK energy price' page.

On the gas curve, the Day-Ahead and Front-Month contracts both went up slightly due supply concerns for August, despite low demand yesterday. Numerous North Sea facilities and Norwegian gas fields are to undergo maintenance at the start of next month which could lead to bullish movement. Further along the curve most contracts made a loss with weaker Brent prices an influence but these losses were somewhat limited by the issues regarding supply. Wind availability is expected to be reduced in the next few days and nuclear availability is also expected to be lower. An increase in demand as well as the lower generation resulted in Day-Ahead going up; closing at £48.20/MWh. There was little change further along the curve as carbon allowances prices remained firm.

Prompt prices turned bearish today after making numerous gains in the last few sessions; Day-Ahead made a loss due to weaker demand levels. LNG deliveries are expected to arrive on the 8th August which should counter the maintenance scheduled at North Sea and Norwegian facilities. Day-Ahead power added £0.85/MWh to its price and opened at £49/MWh, as wind availability is set to fall which will lead to a reliance on more expensive gas-fired generation. Api2 coal and Brent strengthened but despite this, Far-Curve prices remained firm.

Market close data has revealed that the 1-year forward price for both commercial gas & commercial electricity made a small loss - closing at 68.04ppt and £51.70/MWh, respectively. This can be seen in the graph below. 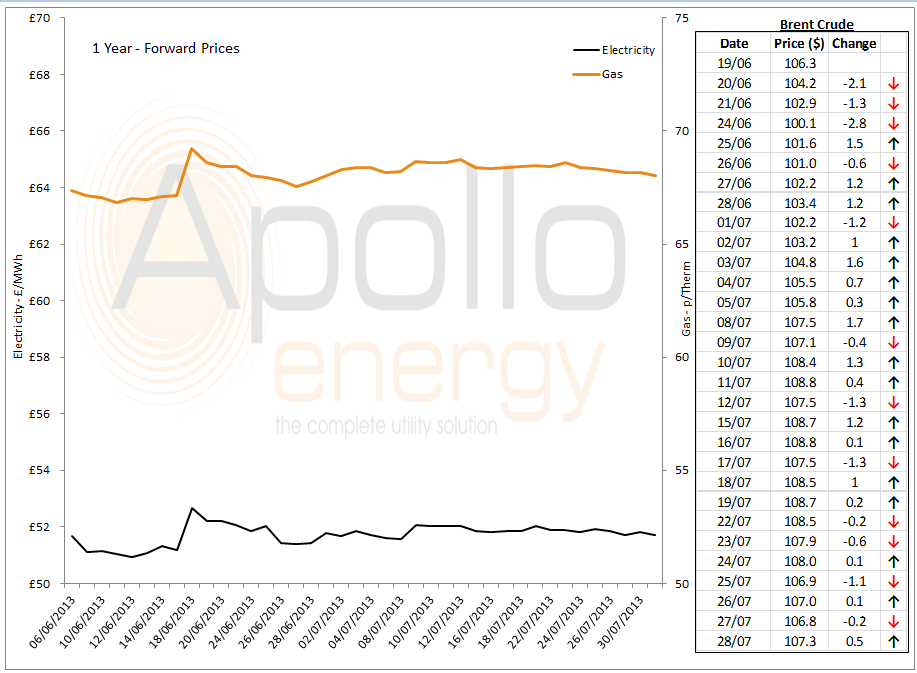 Brent prices showed little change yesterday despite the threat of supply cuts in Libya while the Brent/WTI spread widened and gasoil cracks fell slightly. While the Suez Canal in Egypt is operating as normal despite an investigation into a suspected explosion.