Renewable energy production is expected to fluctuate in the next few days but thermal supplies should see an increase. The price of coal has dropped slightly and a decrease in near-term power prices has led to lower year-ahead prices. The UK gas system opened long this morning on the back of lower demand and healthy supply levels. BBL, Langeled and LNG flows have all improved which should lead to gas contracts taking a bearish direction today. Today's prices can also be found in an easy to read table on our 'current UK energy price' page.

Day-Ahead gas closed Friday's session at 65.8ppt after opening the session lower but gradually climbed throughout the day. BBL imports saw a 50% increase from Thursday and stood at 14mcm, while the Bacton Zeebrugge pipeline saw a reduction in flows. Further along the curve, contracts registered losses of around 0.2ppt on average as Brent failed to strengthen. The August-13 contract has expired and finished its cycle at £48/MWh after taking a bullish direction early last week. Day-Ahead shed just over £2/MWh and took influence from increased nuclear availability and a peak wind generation forecast of around 2GWh at the weekend. Seasonal contracts made minor gains and the December-13 EUA went up by â‚¬4.33/tn due to lower availability.

The system opened at 26mcm long which led to the Day-Ahead contract making a small loss. The Zeebrugge interconnector experienced reduced exports and the Front-Month contract went up slightly as maintenance is scheduled in Norway on the 10th of August which will last until the 19th. Every power contract made a gain this morning except Winter-15 as the curve mirrored its gas counterpart somewhat and took influence from stronger carbon prices. Brent crude and APi2 coal prices opened at a discount with Brent struggling to increase in price due to weaker Chinese manufacturing output.

Market close data has revealed that the 1-year forward price for commercial gas saw no change over the weekend while commercial electricity went up slightly - closing at 68.18ppt and £51.80/MWh, respectively. This can be seen in the graph below. 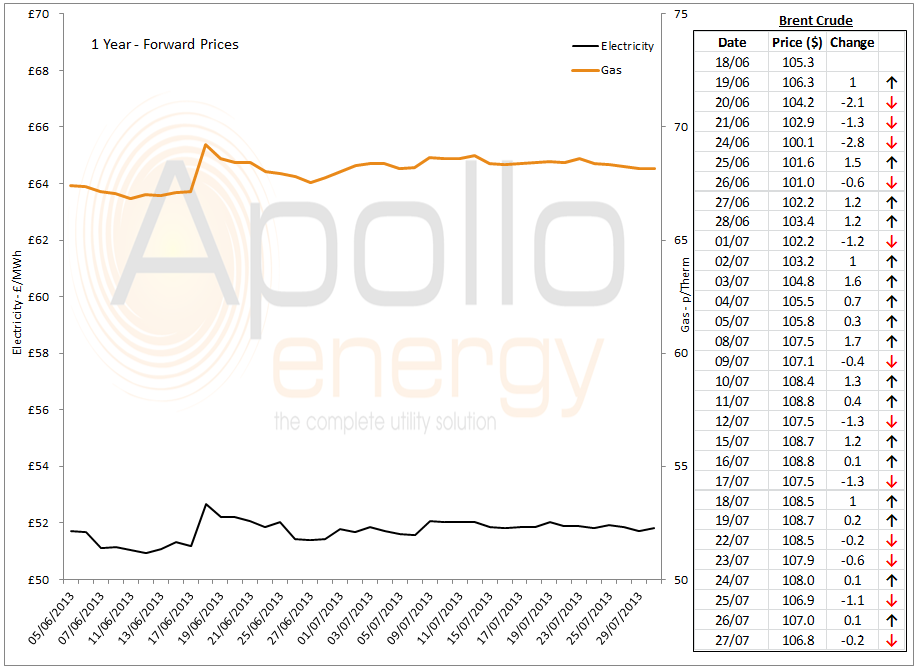 Brent prices saw a decrease on Friday and timespreads also went down while the Brent/ WTI spread widened. The tensions in Sudan will see numerous pipelines shutdown but this closure date has been put back by two weeks in the hope that matters will be resolved.