Spot prices moved higher yesterday as wind generation is expected to fall throughout the week after reaching very high levels on Monday; prices were also helped to increase by colder temperatures. Growing demand levels and a drop in Langeled flows earlier in the session helped NBP prices post gains yesterday. However the system became more balanced later in the session thanks to net storage withdrawals to limit the gains seen on the near-curve. Today UK LDZ demand fell by 3mcm and the currently short system is expected to balance due to healthy UK production and storage withdrawals; near-curve prices are expected to fall during the session as a result. Today's prices can also be found in an easy to read table on our 'current UK energy price' page.

Most gas contracts softened by the end of yesterday's session with Day-Ahead displaying a price drop of 1ppt while Front-Month shed 0.45ppt from its price. A revised weather forecast for December has predicted milder than average temperatures for that month which has helped the Dec-13 contract make a loss. Front-Month Brent decreased by $0.07/bbl due to improved US inventories which saw seasonal contracts take a downward direction. Day-Ahead power added £1.60/MWh to its price as wind generation is forecast to fall and supply levels have also declined. Contracts further along the curve showed little movement although seasonal contracts were slightly bearish following Front-Month APi2 coal's loss of $0.95/tn.

On the gas curve, Day-Ahead moved 0.85ppt higher as a consequence of weaker BBL flows and supply concerns. LDZ demand is expected to edge above 145mcm tomorrow which could help the bulls seize control of the curve tomorrow. Front-Month went up today after posting losses for the last few days while the far-curve took influence from a weaker British Pound and also moved higher. Wind generation was higher than anticipated today which led to Day-Ahead falling by £2/MWh while healthy gas supplies also helped to weigh on prices. However Front-Month made a gain of £0.30/MWh and contracts further along the curve took direction from gas and the weaker Pound to climb higher.

Market close data has revealed that the 1-year forward price for both commercial gas & commercial electricity went up - closing at 66.97ppt and £52.45/MWh, respectively. This can be seen in the graph below. 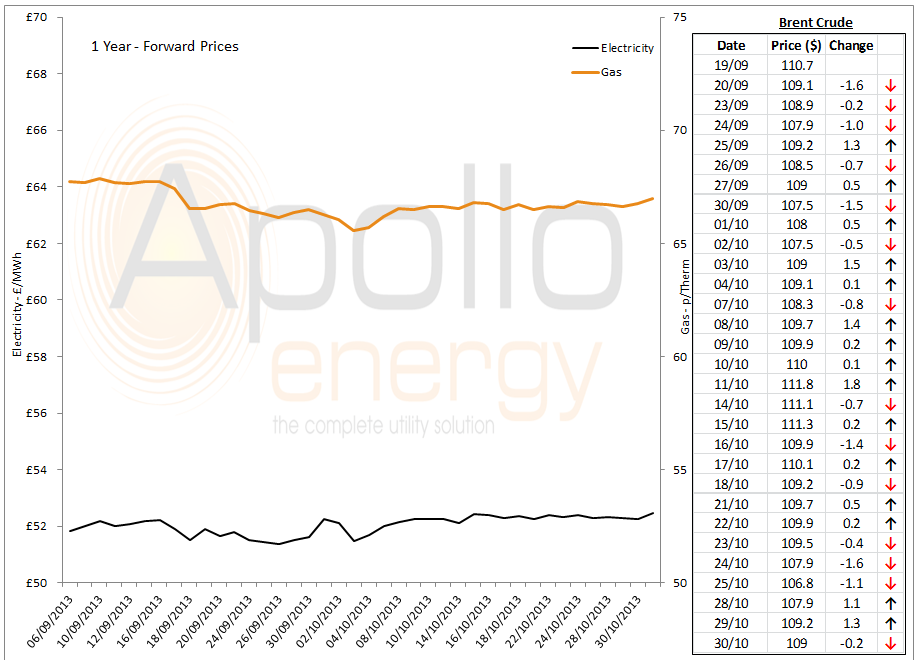 Note: Brent Crude prices are taken from opening market data, and do not represent the price as it changes throughout the day. Latest Brent Crude Prices Brent 1st-nearby prices fell by $0.60/b yesterday but rebounded back to $109/b this morning as an increase in US stocks continues to drive the market.