Higher demand levels helped spot prices move higher yesterday but the price gains were limited by higher wind availability. Today wind production is still healthy but a large increase in Brent and stronger demand helped the bulls take firm control of the curve. NBP gas prices increased yesterday after falling earlier in the morning due to an over-supplied system; however an increase in storage injections and a drop in BBL flows meant the system closed flat. UK LDZ demand is 17mcm higher than it was yesterday but this has been countered by stronger supply levels as improved UK production and higher Langeled flows made up for a drop-off in BBL output; November-13 prices could move down as a result. Today's prices can also be found in an easy to read table on our 'current UK energy price' page.

Near-curve gas prices climbed higher yesterday as unpredictable weather has been forecast for this week while a short linepack also added to the bullish sentiment. The UK system opened the session at 10mcm long but fell throughout the day and closed 14mcm short as Langeled flows decreased by around 36mcm. Front-Month Brent increased to $108.63/bbl following a reduction in Libyan oil exports due to protests. December-13 closed £0.30/MWh lower in its first session as the new front-month and ended the day at £54.50/MWh. Day-Ahead in contrast moved higher and added £0.65/MWh to its price on the back of a higher demand forecast with levels of 48.9GW expected for today. Wind production was above average which limited the gains somewhat as peak generation reached 5.1GWh.

Prompt gas contracts made further gains as a short UK system was expected for today due to BBL flows falling from 20mcm to 7mcm at the end of yesterday's session. Prices ignored the slightly milder temperatures which have been seen on the continent. Front-Month also opened at a premium along with Brent which started the day above $109/bbl due to lower exports coming out of Libya. On the far curve contracts were rather bearish with Front-Quarter and seasonal contracts decreasing by 0.20ppt on average. Day-Ahead power ignored strong wind generation which increased its share of the generation mix to 11% and rose by £2.60/MWh. Stronger Brent was the main driver of prices for the rest of the curve as contracts failed to take direction from bearish coal. December-13 APi2 coal fell by $1/tn due to lower demand although its power counterpart saw a rise of £0.15/MWh. Carbon allowance prices have also shown signs of strengthening this morning which is thought to have helped seasonal contracts open at a premium.

Market close data has revealed that the 1-year forward price for commercial gas went up while commercial electricity made a small loss - closing at 66.79ppt and £52.23/MWh, respectively. This can be seen in the graph below. 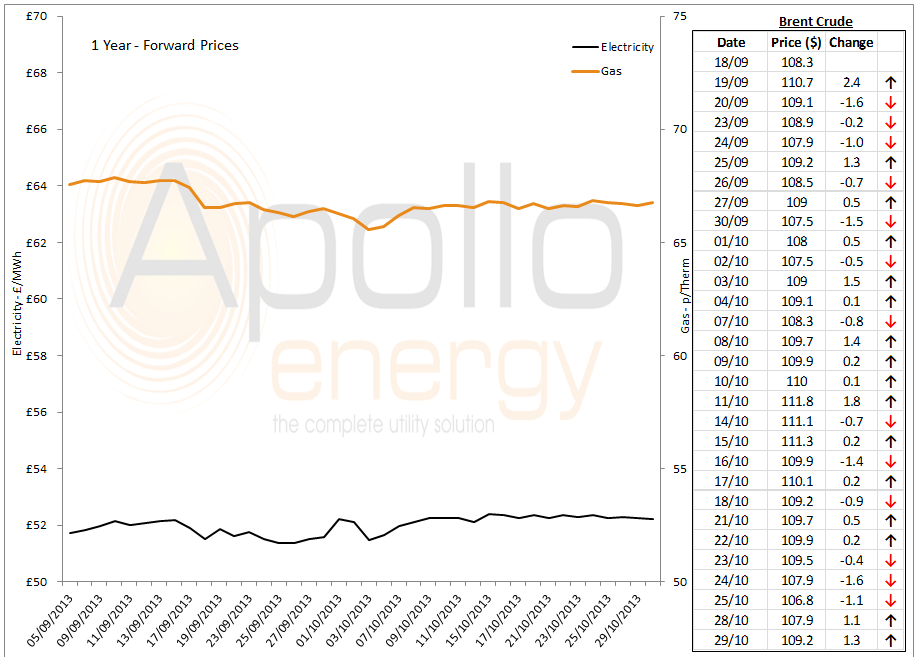 Brent 1st-nearby prices rose by $2.68/b yesterday to edge above £109/b due to positive data regarding American production and new tensions in Libya. WTI displayed less prominent gains and went up by $0.83/b taking the Brent/WTI spread to -$10.6/b this morning.