Spot power prices fell yesterday due to low demand levels, while improved solar production in Germany offset reduced wind generation. Wind levels are expected to fall further today and solar production is also forecast to decrease. However, weaker coal prices should help contracts decrease further this afternoon. Gas prices also followed a bearish trend due to improved LNG flows and low consumption. Overall gas flows are lower today due to scheduled maintenance which means any downward movement will be limited, although the situation in Ukraine remains relatively calm. Today's prices can also be found in an easy to read table on our 'current UK energy price' page.

Gas prices fell across the curve yesterday after displaying strong gains during Monday's session. Day-Ahead decreased by 0.75ppt despite a drop in flows due to maintenance at various gas fields and the temporary shutdown of the Seal pipeline. Further LNG deliveries are expected to arrive in the UK in the next few days and storage levels remain high. Day-Ahead power was the only contract to move higher yesterday and added £0.40/MWh to its price. Carbon contracts strengthened in the afternoon and offered some support to power contracts, although stronger wind generation was a bearish influence on the near-curve.

Further price-drops were observed on the gas curve this morning with September-14 the biggest mover, opening at a 0.35ppt discount. Most contracts displayed losses between 0.10ppt and 0.15ppt despite slightly lower gas flows, meaning the system opened short. On the power curve, Day-Ahead fell lower on the back of the usual drop in demand on Friday. Further along the curve the movement was varied with some monthly contracts rising by around £0.20/MWh.

Market close data has revealed that the 1-year forward price for both commercial gas & commercial electricity decreased - closing at 56.10ppt and £48.35/MWh,respectively. This can be seen in the graph below. 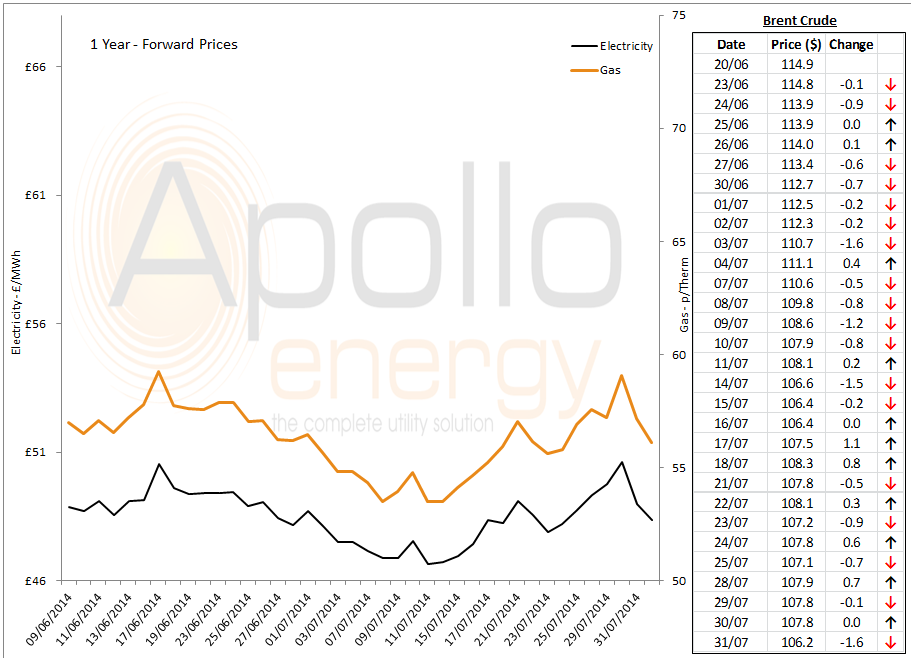