Spot power prices moved down due to well-supplied system and an increase in renewable generation. A further price drop is expected this afternoon as fundamentals are generally unchanged and coal prices are set to fall. Despite consumption levels rising slightly above the seasonal norm, the UK gas system remained long throughout yesterday's session on the back of healthy supply; prices moved down as a result. This bearish trend is expected to continue this afternoon as the supply picture remains strong. Today's prices can also be found in an easy to read table on our 'current UK energy price' page.

Gas contracts displayed sizeable losses yesterday, with Q4-14 registering the biggest loss of 2.44ppt. The UK gas system remained long throughout the session and storage levels are currently over 90% full which helped Day-Ahead shed 1.20ppt from its price. The power curve also followed a bearish trend as strong gas supply offset the on-going concerns in regards to the situation in Ukraine. September-14, Q4-14 and Winter-14 were the session's biggest movers as EU sanctions provided further downward pressure on contracts.

Linepack was 10mcm short at the start of today's session despite LNG send-outs rising to 57mcm via South Hook. Above average temperatures are expected to last until mid-August at least in Europe which helped prices fall further. Wind generation levels are expected to decrease by around 50% tomorrow which provided some support to Day-Ahead. However, despite this drop in wind generation the prompt contract fell by £0.40/MWh due to low demand.

Market close data has revealed that the 1-year forward price for both commercial gas & commercial electricity decreased - closing at 57.17ppt and £49.00/MWh,respectively. This can be seen in the graph below. 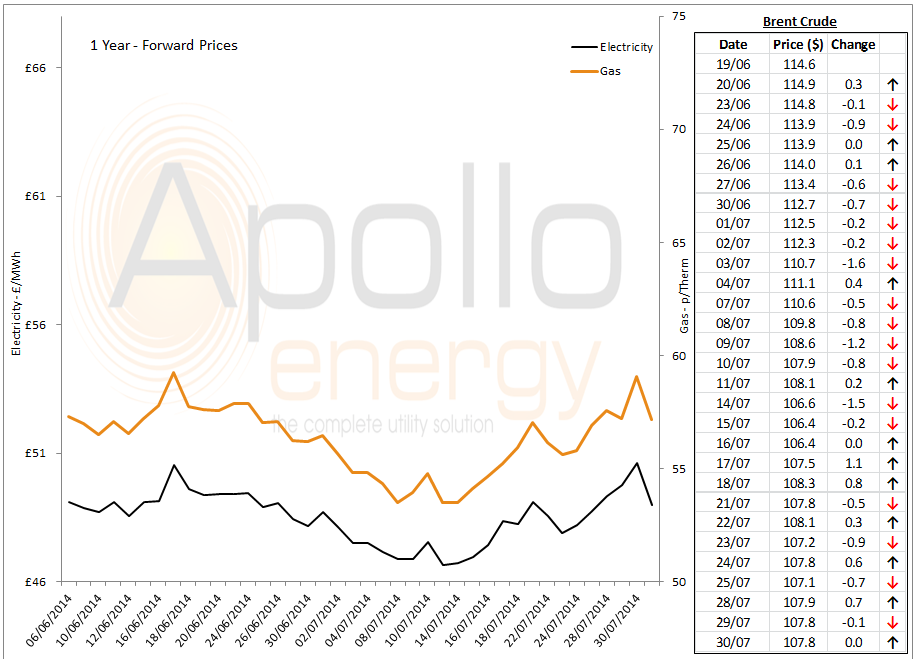 Brent 1st-nearby prices remain around $107.5/b this morning ahead of a US Oil Federation meeting tonight. WTI prices displayed a loss of $0.70/b at the end of last night's session and currently trades at $101/b.