Demand levels were very similar to last week and averaged just above 45GW which is higher than the seasonal norm. Colder weather which has hit the UK is the main cause for this rise in consumption. A slight uptick in temperatures has been forecast for the start of next week but this rise is expected to be temporary with harsher weather returning later in the week.

Wind generation levels were higher than last week but were still rather low with an average 2.1GW. Wind levels were at their weakest on Thursday with peak generation at 0.7GW but Tuesday and Friday saw peak levels of around 3GW.

Coal-fired power generation was at the same level as last week but nuclear and gas generation both saw an increase with averages of 7GW (Nuclear) and 18.1GW (CCGT). The opening price for Day-Ahead power was around £2/MWh lower than last week as overall energy generation improved with stronger nuclear and wind availability helping to weigh on prices; the average opening day-ahead price this week was £49.21/MWh. 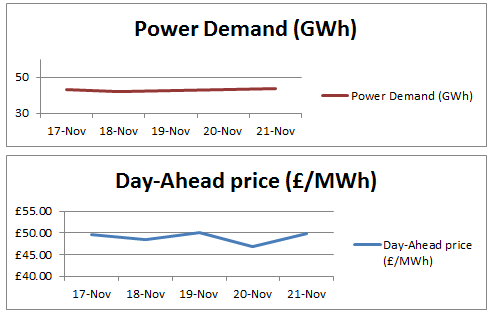