Low demand and healthy storage levels saw gas prices move down yesterday but a slight decrease in supply should lead to bullish movement this afternoon. Power prices were generally stable with an increase in demand being offset by improved wind generation. Today prices are expected to decrease as demand levels should fall tomorrow and wind generation remains fairly high. Today's prices can also be found in an easy to read table on our 'current UK energy price' page.

The gas curve fell by around 1ppt on average yesterday as weaker demand and rising storage levels helped the bears seize control. LNG send outs are currently high with further deliveries expected this month which provided additional downward pressure. Further along the curve the losses were less noticeable with Summer-16 falling just 0.20ppt, while Summer-15 closed 0.80ppt lower. Day-Ahead power climbed £0.35/MWh higher and ignored the increase in wind generation which was forecast for today and instead the contract took direction from an expected rise in demand. Further along the curve prices followed their gas counterparts with some contracts falling by as much as £0.45/MWh with stable carbon contracts providing no impetus.

Gas prices inched higher this morning with Day-ahead opening at a 0.40ppt premium as the UK gas system was balanced for most of the day but fell short just before closing. Gains were seen across the curve with Front-Month rising by 0.30ppt and June-14 was the biggest mover, adding 1.80ppt to its price. On the far-curve seasonal contracts increased by as much as 0.85ppt and took influence from strengthening Brent. Power prices failed to show any clear direction this morning as Day-Ahead opened £0.60/MWh lower and July-14 rose by £1.10/MWh. The usual drop in demand on Fridays assisted by healthy wind generation helped to weigh on the near-curve, although temperatures are expected to be slightly cooler over the weekend.

Market close data has revealed that the 1-year forward price for commercial gas moved higher while commercial electricity decreased - closing at 60.40ppt and £50.93/MWh,respectively. This can be seen in the graph below. 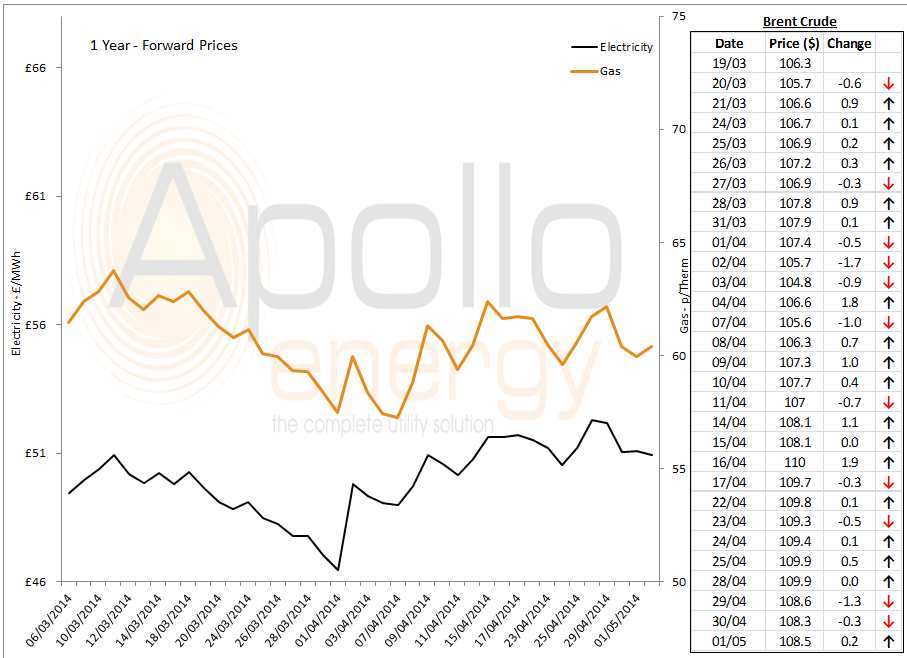 Brent 1st-nearby prices have climbed slightly higher and displayed a small increase of $0.02/b this morning; currently trading at $108.58/b.