Movement on the power market was extremely limited yesterday due to the UK bank holiday but prices are expected to take a downward direction today as demand is relatively low and renewable production has improved. Gas contracts climbed higher at the end of last week as the situation in Ukraine remained volatile and these levels were maintained yesterday due to reduced trading. However bearish movement is expected this afternoon as the gas market looks to correct itself.

Price increases were observed across the gas curve as the market took direction from the concerns in Ukraine and its outstanding gas bill. Seasonal Contracts displayed gains of between 0.30ppt and 0.90ppt, while Day-Ahead moved 0.90ppt higher as a result of a short UK gas system and supply uncertainty; the arrival of an LNG delivery failed to have any impact. Day-Ahead power fell by £1.25/MWh despite a lower wind generation forecast and an expected rise in demand; low commercial consumption due to the UK bank holiday was the main driver. Most contracts followed their gas counterparts with the gains ranging from £0.10/MWh for Winter-15 to £0.90/MWh for Q4-14; additional support was provided by stronger carbon contracts.

Gas prices have decreased this morning despite a short UK gas system and weather which is expected to be around the seasonal norm. Day-Ahead recorded a 0.80ppt loss while July-14 was the biggest mover and dropped by 0.95ppt. Price-drops were also seen on the far-curve with Winter-14 opening at a 0.65ppt discount. On the power curve Day-Ahead has decreased to its lowest point of 2014 and currently trades just below £40.00/MWh with impetus coming from high wind production and low demand. Losses trickled through to the rest of the curve with Q3-14 opening £0.70/MWh lower and the summer months all moving down despite scheduled maintenance at power plants.

Market close data has revealed that the 1-year forward price for both commercial gas & commercial electricity climbed higher - closing at 60.58ppt and £51.50/MWh,respectively. This can be seen in the graph below. 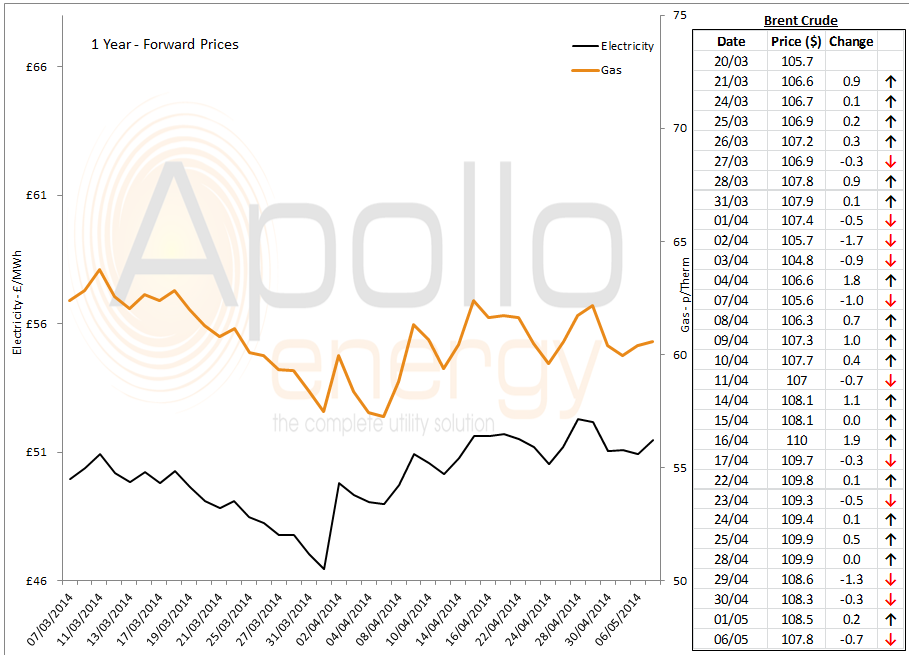 Brent 1st-nearby prices have fallen by $0.04/b this morning and currently trade at around $107.8/b. Oil prices are currently contesting in a tug-of-war between higher Libyan exports and the unpredictable situation in Ukraine.