Spot power prices have weakened, as a drop in commercial consumption is expected in European countries on May 1st which should not increase until Monday. Further losses are likely this week on the back of this drop in demand, although downward movement will be limited due to a slightly weaker supply picture. Gas contracts also shed from their price as the situation in Ukraine is relatively stable at present and gas demand remains low due to warmer temperatures. Overall gas flows are currently healthy which has led to a well-supplied UK gas system; bearish movement is expected this afternoon as a result. Today's prices can also be found in an easy to read table on our 'current UK energy price' page.

Most gas contracts strengthened yesterday with the price increases ranging from 0.20ppt for Q4-14 to 0.45ppt for Q3-14. Day-Ahead fell by 0.05ppt as the UK gas system was long throughout yesterday's session thanks to comfortable supply. Temperatures are expected to be slightly cooler over the weekend which has provided support to the near-curve. Prompt power prices were relatively unchanged yesterday with a gain of £0.35/MWh the largest movement observed, while Day-Ahead also increased slightly despite improved wind production.

The gas curve opened at a discount this morning after a series of gains in the previous session. Prompt prices took direction from above average temperatures which has resulted in low demand. In terms of gas flows, imports via the Bacton BBL pipeline increased to 24mcm and LNG flows are also healthy. Day-Ahead power opened £1.00/MWh lower as wind generation levels are set to improve tomorrow according to the National Grid. The rest of the near-curve also displayed losses as contracts took direction from their gas counterparts, while seasonal contracts moved higher along with carbon contracts.

Market close data has revealed that the 1-year forward price for commercial gas moved down while commercial electricity made small gain - closing at 59.97ppt and £51.10/MWh,respectively. This can be seen in the graph below. 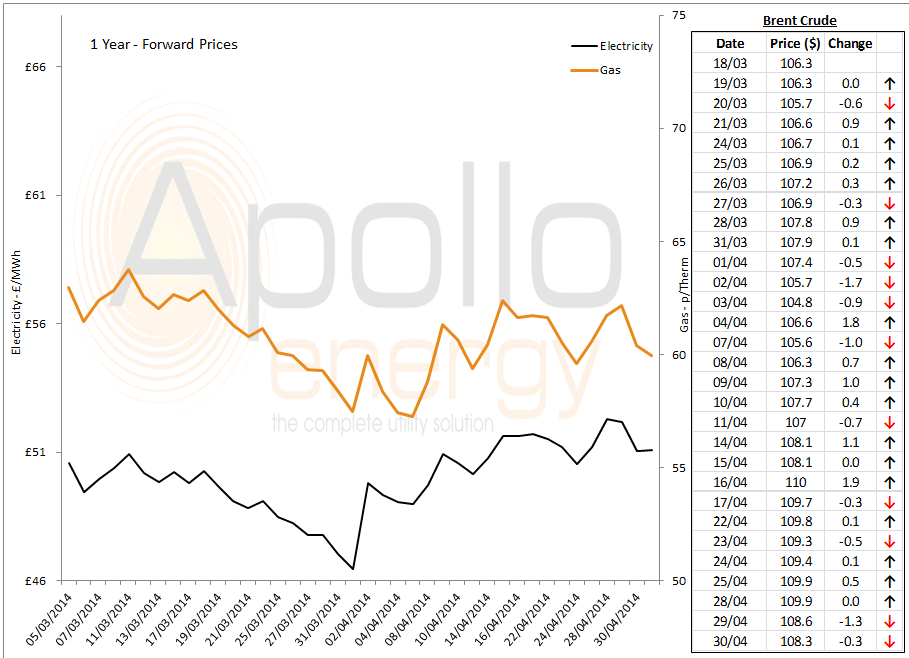 Brent 1st-nearby prices made small gains yesterday and rebounded back above $109/b temporarily as the expected improvement in Libyan exports is under question following further protests in the country.