Spot power prices increased yesterday due to weaker renewable generation and below average temperatures. Prices have displayed minor movement today as an expected drop in demand and weaker gas has helped to subdue any bullish movement. Gas prices decreased on Thursday as Norwegian gas flows were close to average levels following the return of the Troll gas processing facility. Today the curve has opened rather flat as an improved supply/ demand picture has offset strengthening fuel.

Movement on the gas curve varied on Thursday as strong demand resulted in a short UK gas system, helping to support the near-curve, with Day-Ahead displaying the largest gain. The May contract ended its cycle yesterday and expired at a very low price due to oversupply. Elsewhere, seasonal contracts recorded losses on the back of a warmer weather outlook. Power contracts moved higher yesterday as the near-curve followed the movement of gas, while May-15 ended its cycle at a much lower level than April-15 did; seasonal contracts were also on the rise. However, industrial demand was expected to drop today and will remain low over the bank holiday weekend.

Day-Ahead gas has opened unchanged today with industrial demand set to remain low on Monday due to the bank holiday. A healthier supply picture has helped to weigh on some contracts, with stronger fuel offering some support on the far-curve; overall movement was minimal. In terms of power, most contracts recorded gains this morning, all be it minor ones. Weaker demand helped to limit the upward movement and temperatures are expected to return to the seasonal norm next week which could pressure down prices this afternoon.

Market close data has revealed that the 1-year forward price for both commercial gas & commercial electricity showed an increase - closing at 47.80ppt and £45.00/MWh, respectively. This can be seen in the graph below. 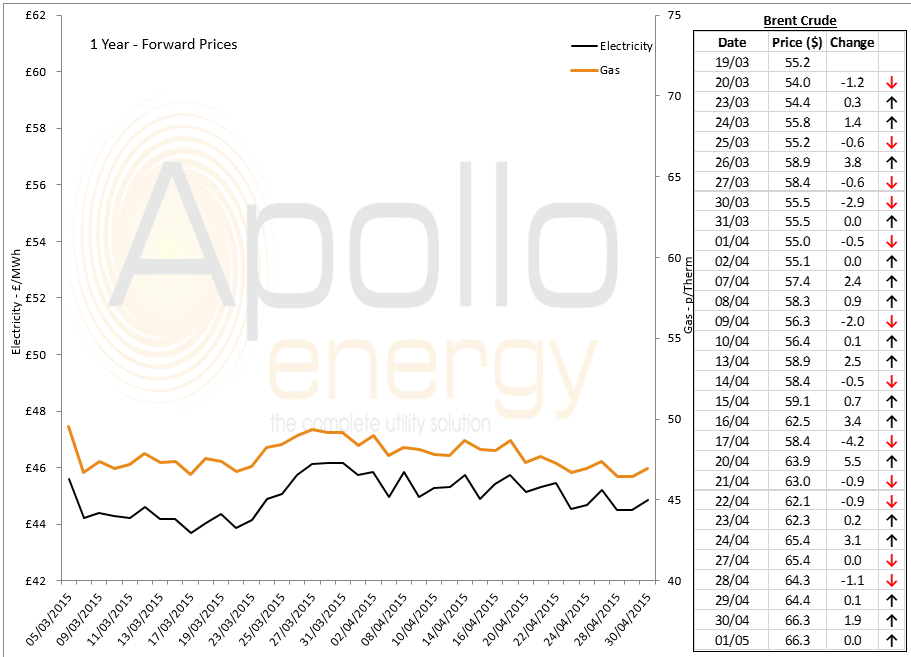 Note: Brent Crude prices are taken from opening market data, and do not represent the price as it changes throughout the day. Latest Brent Crude Price Brent 1st-nearby prices are currently stable and posted a gain of just $0.03/b overnight as global oversupply has been offset by geopolitical tensions.