Spot power prices moved down over the bank holiday weekend as improved wind generation and reduced consumption helped the bears take control. However, the losses were minor as nuclear generation in both France and Belgium has shown a significant drop. European gas prices also displayed a bearish trend yesterday with strong Norwegian and Russian supply, as well as lower demand the main market drivers. Temperatures are expected to improve this week and demand levels are 10% lower, compared to Friday; the outlook for this afternoon is bearish as a result. Today's prices can also be found in an easy to read table on our 'current UK energy price' page.

Gas contracts shed from their price on Friday as overall supply levels were healthy following the completion of maintenance at the Troll gas field in Norway. The UK gas system was long throughout the session, further helped by increased imports from Holland. The power curve displayed losses at the end of last week with June-15 dropping to its lowest point in three months. Seasonal contracts recorded minimal movement, while a warmer weather outlook helped to weigh on the prompt contract.

Temperatures are expected to improve this week but will most likely remain below the seasonal norm. Movement has been rather mixed this morning as supply levels remain strong and further LNG deliveries are expected to arrive at South Hook in the next two weeks. Weaker demand and stronger wind generation helped Day-Ahead power move down this morning, recording a loss of over $2/b. Overall movement on the curve was generally bearish with some contracts following their gas counterparts.

Market close data has revealed that the 1-year forward price for commercial gas displayed a small gain, while commercial electricity decreased - closing at 46.99ppt and £44.70/MWh, respectively. This can be seen in the graph below. 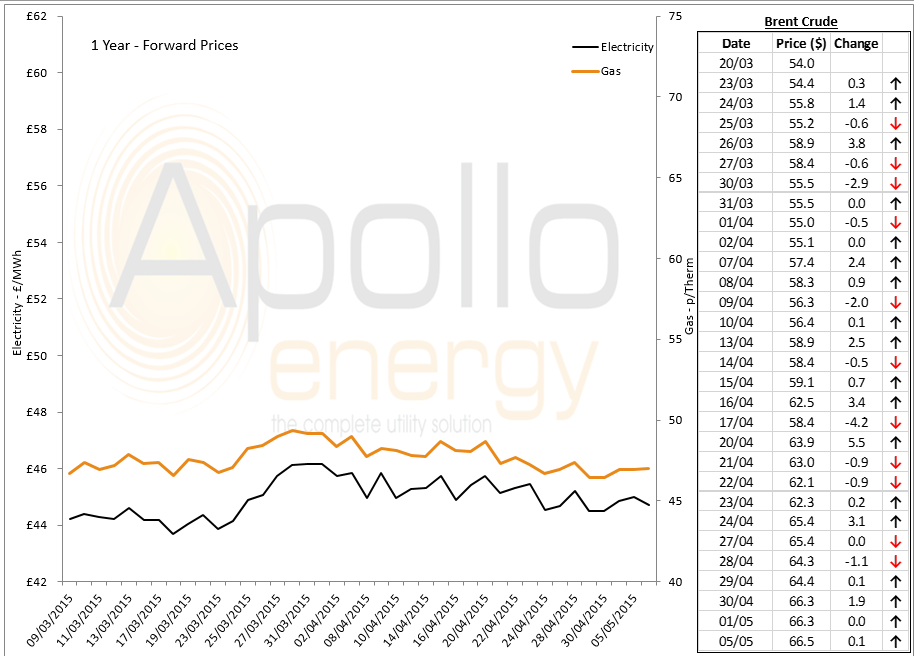 Brent 1st-nearby prices recorded small gains yesterday and currently trade at around $66.45/b. However, losses could occur later today on the back of a strengthening US Dollar and rumours that Saudi Arabia could end the bombing of Yemen.