Spot power prices stabilised yesterday as healthy generation levels were offset by higher demand. Prices have moved higher this morning due to rising gas prices, with renewable generation also expected to drop in the coming days. However, temperatures are expected to revert back to around the seasonal average next week. Gas prices climbed higher yesterday as the expected restart of the Troll gas facility was delayed, restricting gas flows into the UK. The UK gas system remains short this morning due to above average demand and an increase in storage withdrawals is expected. The imminent return of the Troll processing facility has restricted some gains on the near-curve, as has Monday's bank holiday. Today's prices can also be found in an easy to read table on our 'current UK energy price' page.

Gas contracts displayed an increase yesterday as below average temperatures raised heating demand, while Norwegian flows were restricted by a delay in the Troll's restart. Meanwhile, upward movement further along the curve was slightly restricted by an improved weather forecast next week. Near-curve power prices also inched higher due to stronger consumption levels, while seasonal contracts increased on the back of stronger oil. Day-Ahead also added to its price with a weaker wind generation forecast providing support.

Gas prices continued to climb higher this morning as the UK gas system is under-supplied due to strong heating demand, with strengthening Brent offering additional support further along the curve. However, an expected rise in Norwegian supply and a scheduled LNG delivery next week should see prices decrease this afternoon. Spot power prices displayed small gains this morning with stronger gas and above average demand assisting the bulls, although healthy supply levels ensured the upward movement was minimal. Rising Brent helped seasonal contracts open at a premium, while the prompt was unchanged.

Market close data has revealed that the 1-year forward price for both commercial gas & commercial electricity showed increased - closing at 46.93ppt and £44.85/MWh, respectively. This can be seen in the graph below. 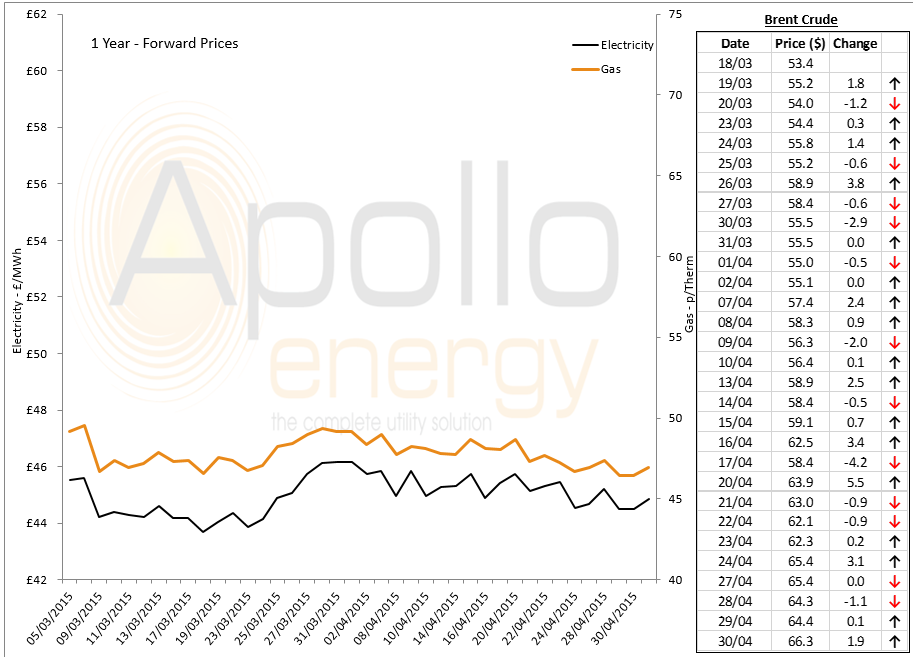 Brent 1st-nearby prices recorded a gain of almost $2/b overnight and currently trade at $66.30/b; support comes from the recent EIA report which shows that oil production in the US is on the rise.