The spot market is currently well-supplied and demand levels are relatively low while numerous outages at power plants have limited any major price drops. Four nuclear power plants in France remain offline and have had their return date postponed with another reactor in Germany also disconnected.

The gas curve encountered numerous losses on Friday following improved Norwegian flows via the Langeled pipeline which countered reduced LNG flows and fewer deliveries. Day-Ahead was one of the few contracts to make a gain and went up by 0.1ppt, thought to be a result of an outage at a Norwegian gas terminal which reduced output to 27mcm/ day. Further along the curve, seasonal contracts shed from their price on the back of a weaker GBP and UK storage level are just under 60% at present. The previous Front-Month July-13 and Q2-13 ended their cycle by making a loss and closing at £46.90/MWh due to lower demand, improved wind availability and weaker prompt gas prices. A 545MW nuclear power plant returned online yesterday after initially going offline on June 17th which has increased availability significantly. Seasonal contracts also made losses and were influenced by weaker oil and gas contracts.

The new Front-Month August-13 and the new Front-Quarter contract were up by 0.35ppt at the start of the session because of concerns regarding LNG flows. The far curve took a bullish direction following an announcement from the US Federal reserve relating to their economic stimulus programme which is set to continue. Day-Ahead power fell by around £2/MWh with increased wind generation and higher nuclear availability resulting in lower demand for gas-fired generation. The rest of the curve took a different direction as Front-Month and Front-Season contracts went up following the gains made by their gas counterparts.

Market close data has revealed that the 1-year forward price for commercial gas went up while commercial electricity made a loss - closing at 68.28ppt and £51.68/MWh, respectively. This can be seen in the graph below. 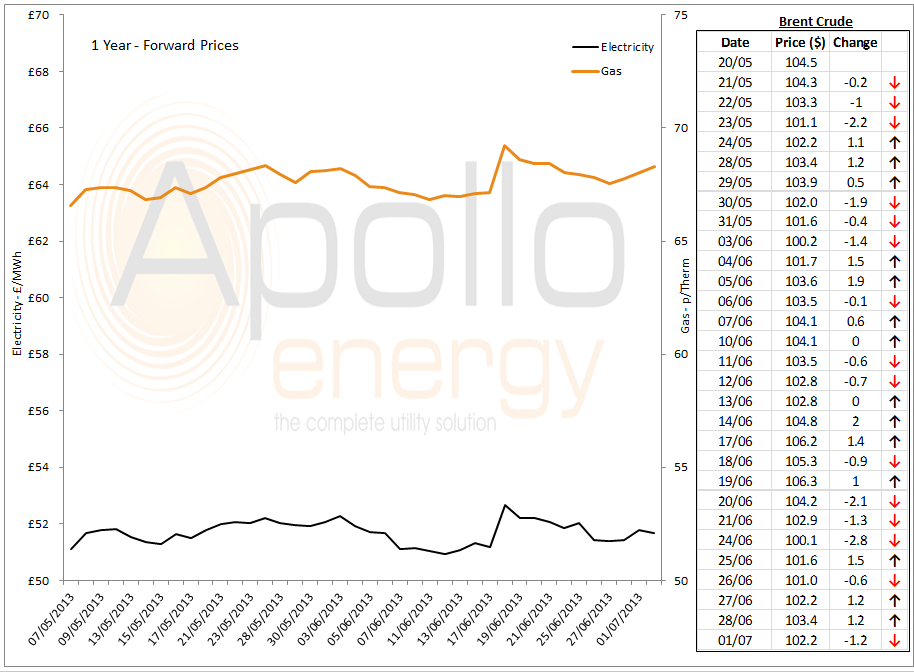 Brent 1st nearby prices moved up from their weekend price with Gasoil cracks rising by 50 c$/b and timespreads are also well supported. The outlook on the financial market is positive following recent comments from Fed members while total product stocks decreased significantly last week. Gasoil inventories were reduced by 10% and are at their lowest level since December, gasoline stocks fell 11% and fuel oil stocks were 7% lower.