Spot power prices have moved down following a bullish session on Wednesday, as temperatures are expected to return to the seasonal norm which will lower cooling demand. However, outages at power plants in Germany have helped to curb some of the losses, while French nuclear and hydro generation is also weaker. Gas prices increased yesterday as demand levels were 40mcm above the seasonal norm due to exports and storage injections, while Russia and Ukraine failed to come to an agreement. A stable supply picture has helped the gas system open balanced this morning which has helped prices to fall slightly. However, the situation regarding Russian supply could result in a rebound this afternoon. Today's prices can also be found in an easy to read table on our 'current UK energy price' page.

Gas contracts climbed higher yesterday as the UK gas system was left short due to a surge in demand. Demand levels were 40mcm above the seasonal average with 39mcm injected into storage sites and 40mcm exported to Belgium, while Dutch BBL flows into the UK remained low. Power prices increased on the back of stronger gas, carbon and oil contracts during Wednesday's session. A significant drop in wind and solar generation was also a bullish factor which offered support to the Day-Ahead contract.

Gas prices have recorded small losses this morning as the UK gas system is much more comfortable as exports and storage injections have eased. Russian gas imports to Ukraine have stopped and instead the country has been relying on reverse flow from Slovakia, while the Greek debt situation has resulted in an unpredictable Euro, combined, these two factors could turn the market bullish once again. Most power prices have shed from their price as demand levels have decreased, while gas and oil prices have also weakened slightly. Overall generation levels have declined which has restricted some downward movement but the supply/ demand outlook remains stable.

Market close data has revealed that the 1-year forward price for both commercial gas & commercial electricity decreased - closing at 45.68ppt and £44.13/MWh, respectively. This can be seen in the graph below. 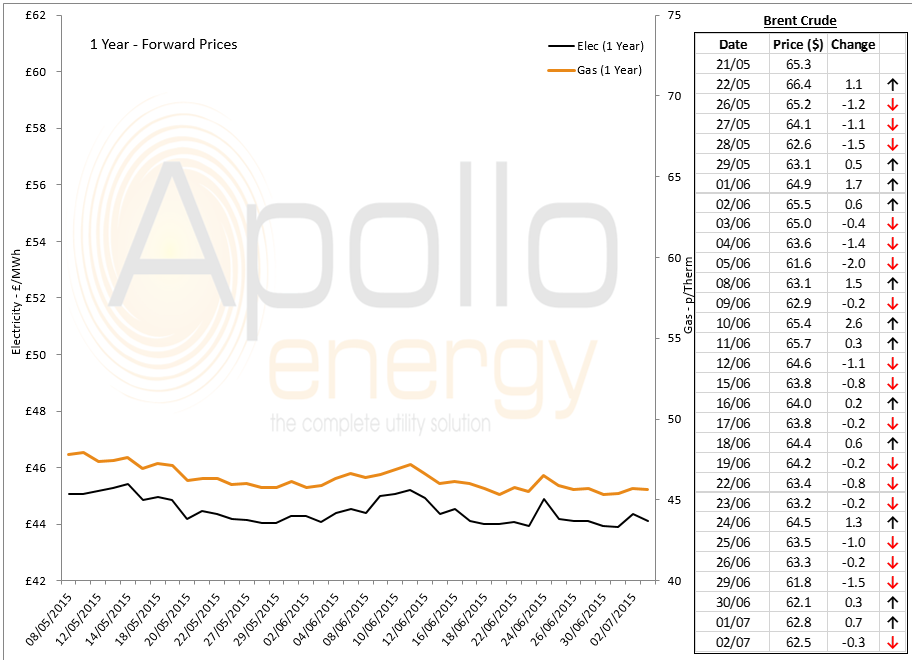 Brent 1st-nearby prices decreased yesterday following a rise in US oil inventories which was shown in the recently published EIA report.