Spot power prices took direction from reports released in Belgium regarding winter supply concerns, leading to significant price increases. Stronger gas pushed prices even higher this morning but bearish movement is expected this afternoon as fundamentals are improving. Gas prices displayed strong gains as tensions in Ukraine are showing no signs of improvement for the time being. The BBL pipeline is expected to return online tomorrow but the UK gas system has opened short this morning as supply remains weak. The presence of Russian troops in Ukraine could lead to EU sanctions and further upward movement is prices in anticipated. Today's prices can also be found in an easy to read table on our 'current UK energy price' page.

Upward movement was observed across the gas curve yesterday as reports of Russian troops entering Ukraine resulted in supply worries. Winter-14 closed the session at 60.30ppt and recorded a gain of 1.05ppt due to concerns regarding supply over winter. The UK gas system was short although gas flows are expected to improve over the weekend. Power prices followed their gas counterparts and also displayed strong gains with Day-Ahead the exception. The prompt contract fell by £0.20/MWh as wind generation was forecast to improve today.

Gas contracts firmed this morning with September-14 opening its last day of trading at 45.65ppt, displaying a gain of 0.60ppt. The Day-Ahead contract also climbed higher as colder temperatures are expected at the start of September. Gas flows have shown little change since Thursday although South Hook output has increased to 34mcm. Most of the power curve opened at a small premium with Day-Ahead adding £1.05/MWh to its price as low wind production and cooler temperatures are expected over the weekend. Elsewhere, numerous contracts on the far-curve opened unchanged and Brent rose by $0.22/b.

Market close data has revealed that the 1-year forward price for both commercial gas & commercial electricity climbed higher - closing at 57.88ppt and £50.15/MWh,respectively. This can be seen in the graph below. 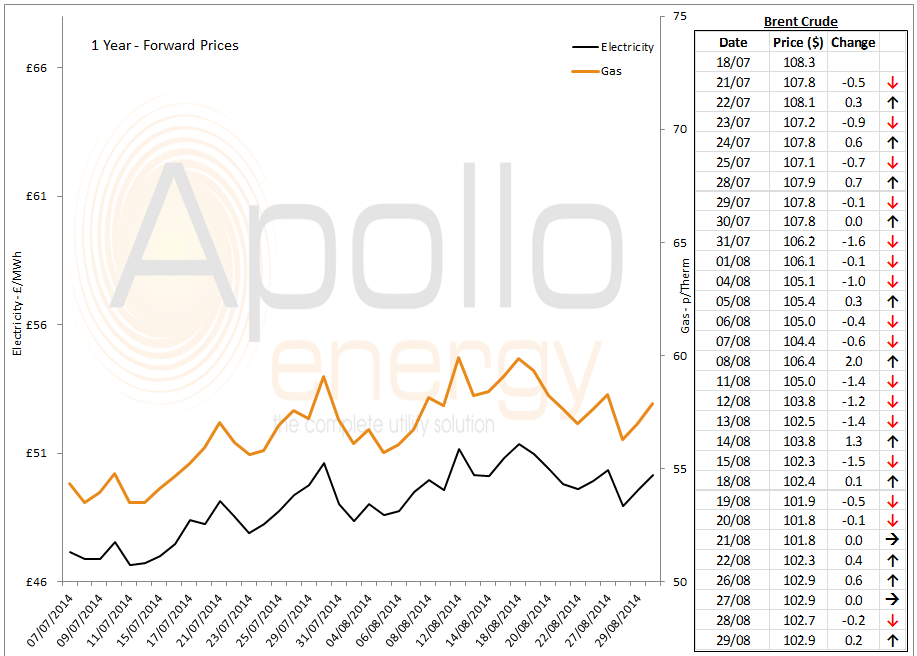 Brent 1st-nearby prices edged above the $103/b mark yesterday due to concerns regarding Russian movement in Ukraine. However, supply is currently healthy and demand is around average which has helped oil prices fall this morning.