Spot power prices are on the rise this morning with direction coming from stronger gas and oil. Warmer weather in Europe increased cooling demand over the weekend and a number of outages at power plants also took place, providing additional support.

Gas prices were unchanged yesterday as the UK gas market was closed due to the Bank Holiday. Today prices have climbed higher due to a surge in oil, despite healthy supply levels and an oversupplied system.

The UK gas was oversupplied on Friday despite a number of outages at Norwegian gas fields. Day-Ahead initially opened at a premium but decreased later in the session on the back of the healthy supply picture. The Far-Curve was dictated by bullish Brent and the majority of contracts moved higher.

Power prices displayed gains on Friday as a consequence of rising gas and oil, with further support coming from an expected drop in wind and solar generation until today. Demand levels are also set to increase with colder temperatures expected in the UK this week.

The gas curve displays numerous gains this morning as a significant rise in Brent has offered support to most contracts and a long UK gas system has had little influence on the market. Overall supply levels are healthy today as the majority of issues at Norwegian gas fields have been resolved.

Power prices continue to mirror the movement of gas and the bullish oil market remains the main market driver, with a decrease in coal prices failing to have any effect. Renewable generation is rather low today but is expected to improve tomorrow, however, temperatures are forecast to drop which should lead to a rise in consumption.

Market close data has revealed that the 1-year forward price for both commercial gas & commercial electricity increased - closing at 42.70ppt and £43.00/MWh, respectively. This can be seen in the graph below. 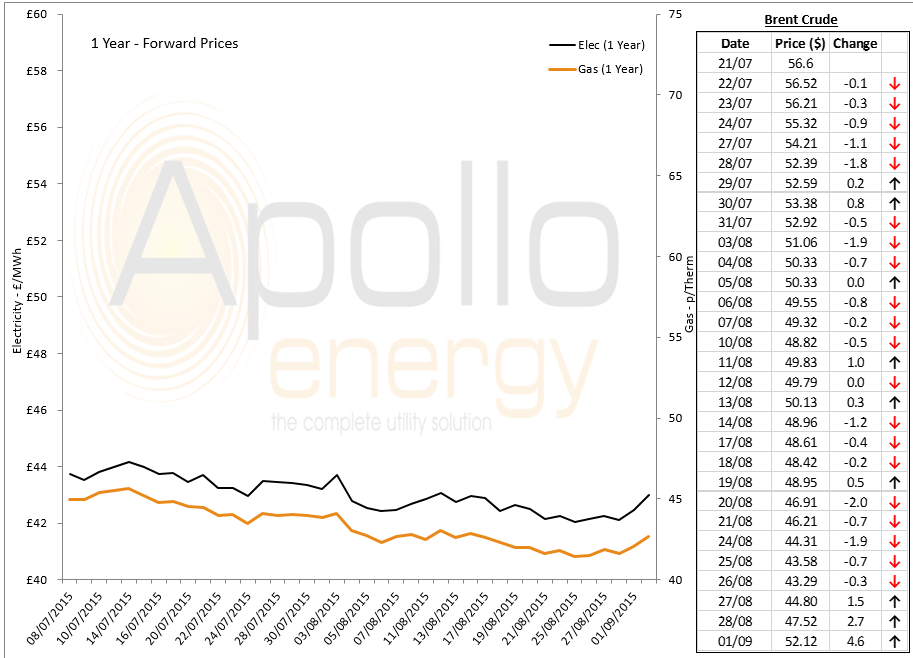 Brent 1st-nearby prices have corrected last month's losses and increased by over $4/b yesterday to trade above $52/b this morning; a significant decrease in US Crude production is main driver behind this sharp rise.