Spot power prices moved higher yesterday as wind generation is on the decline and warmer weather should result in increased cooling demand. Prices have continued to rise this morning as the supply/ demand picture is generally unchanged with stronger gas providing additional support.

Gas prices increased on Thursday with a bullish oil market influencing most contracts and a short UK gas system also a factor. Norwegian flows have returned to normal levels this morning which has resulted in an oversupplied gas system, however, stronger oil and an expected decrease in LNG supply next week has pushed some contracts higher.

Gas contracts displayed an upward trend yesterday with rising Brent the main market driver. Day-Ahead and other contracts on the near-curve were supported by a short UK gas system on the back of reduced Norwegian supply; flows were 13mcm lower than Wednesday's levels.

Gains were also observed on the power curve as most contracts followed their gas counterparts. A stronger demand forecast and an expected drop in renewable generation helped contracts on the near-curve increase, while rising oil and coal supported prices further out. Day-Ahead rallied higher on the back of a restriction at the 475MW unit 7 Hinckley Point B nuclear plant which will see capacity drop to 200MW.

Gas prices continued to move higher this morning but the gains were less prominent than yesterday following a rise in Norwegian supply, which contributed to a long gas system. Stronger oil was the main cause for this morning's upward movement with LNG send-outs also set to fall next week.

Rising gas, coal and oil helped power prices strengthen this morning with bullish movement displayed across the curve. Wind generation is set to decrease over the weekend, while warmer weather could lead to a rise in demand, supporting the prompt.

Market close data has revealed that the 1-year forward price for both commercial gas & commercial electricity increased - closing at 42.07ppt and £42.45/MWh, respectively. This can be seen in the graph below. 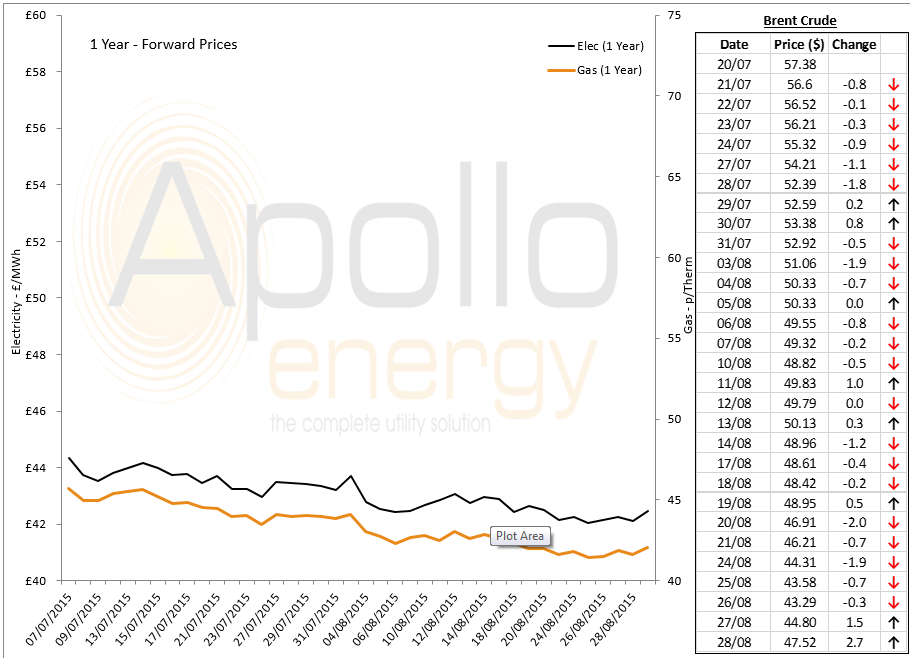