Spot power prices increased yesterday morning but stabilised in the afternoon with direction coming from the oil and gas markets and a weaker supply/ demand outlook for this week. Some contracts have recorded a loss this morning on the back of weaker fuel and carbon emission allowances but overall movement is mixed.

Gas prices moved higher on Tuesday following a surge in oil prices, a decrease in LNG supply and a colder weather forecast. Prices opened higher once again this morning with further gains expected as maintenance is scheduled to begin at two gas fields tomorrow and demand levels are expected to rise.

Power prices were dictated by a large increase in Brent and a stronger gas market yesterday morning. Renewable generation is expected to increase over the next few days but this did little to prevent the day-ahead contract from posting gains. Demand levels were also expected to climb higher today, while the Pound weakened against the Euro.

Gas prices continue to move higher this morning with colder weather expected to last until the weekend at least, resulting in higher demand. Exports to Belgium also remain high and an expected drop in Norwegian supply tomorrow has helped the prompt add 1.35ppt to its price.

Movement on the power curve is varied this morning with weaker Brent weighing on some contracts further along the curve and higher consumption supporting the near curve. Improved renewable generation has helped to restrict some upward movement on the prompt but the contract still moved £0.55/MWh higher.

Market close data has revealed that the 1-year forward price both commercial gas moved higher, while commercial electricity decreased - closing at 42.90ppt and £42.88/MWh, respectively. This can be seen in the graph below. 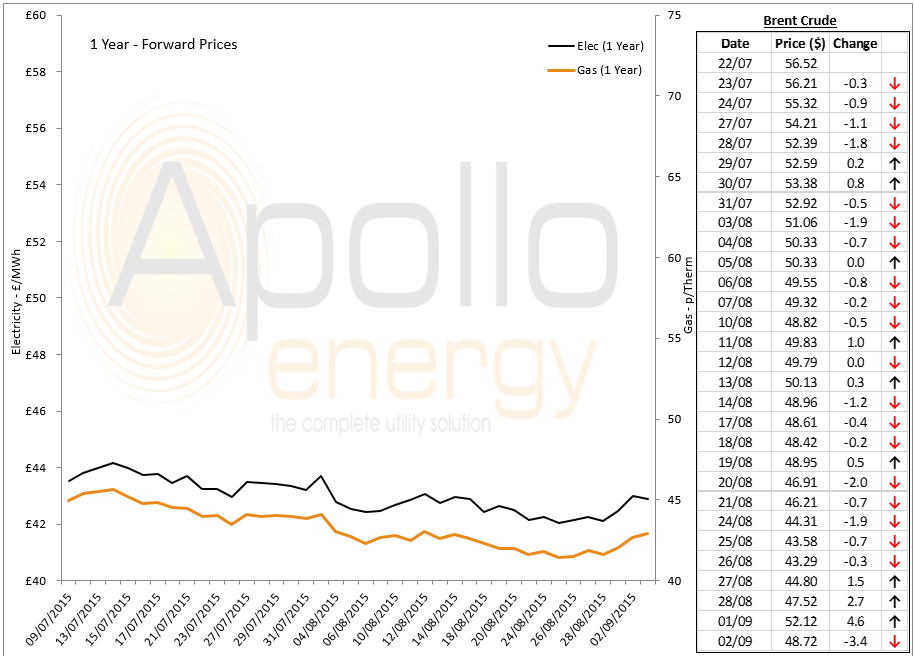 Brent 1st-nearby prices plummeted overnight following huge increases over the previous three sessions, with prices falling back to around $48.5/b on the back of recent EIA figures which showed weak US manufacturing data.