Spot power prices are generally stable at present as overall fundamentals are little changed from previous sessions. However, renewable generation is set to drop which could help support the prompt, although mild weather should keep demand levels low.

Gas prices decreased yesterday as demand levels dropped by around 10mcm and the Pound strengthened against the Euro. A rise in storage injections led to an undersupplied system this morning, although Langeled and LNG output remained strong. Exports to Belgium have also fallen by 10mcm and today's outlook is stable-to-bearish.

Gas prices decreased on Wednesday as the system was long for the majority of the session due to lower exports and weaker demand. LNG supply was also healthy with further deliveries expected in the UK due to a high storage levels in the majority of countries.

The gas curve displayed losses this morning as mild weather forecasts will reduce demand levels over the coming days. LNG supply also remains strong with a delivery now expected at the Dragon terminal, due to high storage levels; this would be the facility's first shipment since April. However, exports to Belgium are set to rise today which could provide support this afternoon.

Power prices have moved down on the back of weaker gas and coal with downward movement evident across the curve. Low demand levels and improved nuclear availability also contributed to the losses. The prompt showed little movement as a drop in wind generation should counter the return of nuclear power plants.

Market close data has revealed that the 1-year forward price for both commercial gas & commercial electricity increased - closing at 41.28ppt and £42.33/MWh, respectively. This can be seen in the graph below. 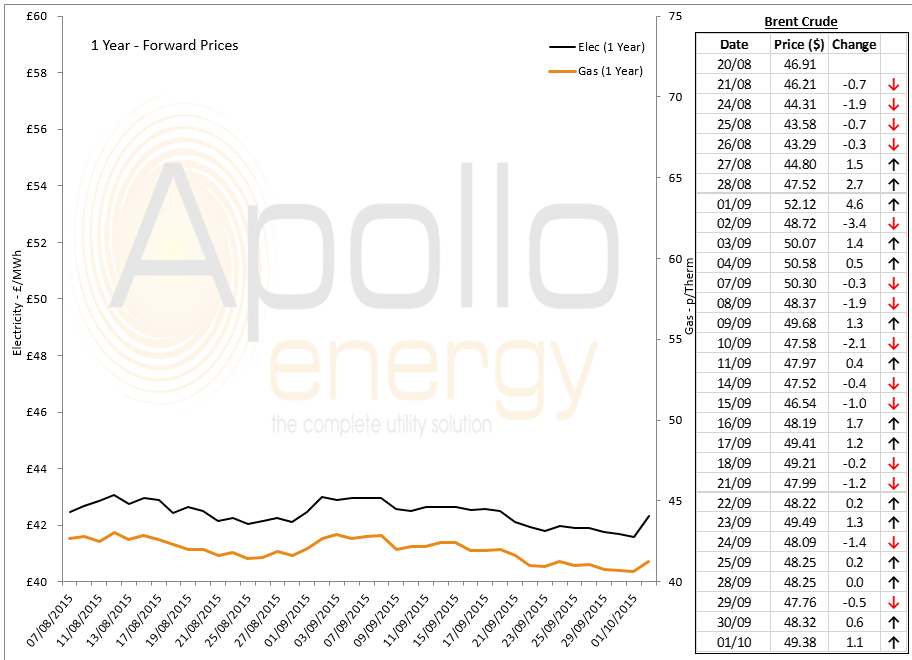 Brent 1st-nearby prices were on the rise yesterday but fail to display a clear trend today in the absence of an obvious market driver. The slight upward movement was a result of geopolitical situations, such as the Russian airstrikes in Syria.