Spot power prices eased yesterday as demand levels were low on the back of mild weather, although a weaker renewable generation forecast for the weekend helped to restrict the downward movement. Temperatures are expected to remain above average next week and wind generation is set to improve which has helped to weigh on prices this morning.

Gas prices weakened on Thursday despite a rise in storage injections as Norwegian supply and LNG send-outs were comfortable. Prices continue to move down this morning as mild weather will keep demand low and the UK gas system is oversupplied.

A rise in demand due to increased storage injections failed to support gas prices yesterday with losses observed across the curve. Day-Ahead was one of the few contracts to open at a premium but fell throughout the session. The start of the winter period led to the surge in storage injections but strong Norwegian and LNG flows offset the difference.

Power prices once again followed the movement of weaker gas and coal contracts with front-month, seasonal and quarterly contracts all closing at a discount. Near-curve contracts were strongly dictated by gas, more specifically the expected arrival of LNG deliveries this month. Meanwhile, a stronger Pound and falling Brent helped to pressure down contracts on the far-curve.

Above average temperatures are expected in the UK over the weekend and throughout next week before turning colder later in the month, this has helped to weigh on near-curve gas prices this morning. The UK gas system has also opened long as storage injections have decreased and flows are healthy.

Falling gas continues to weigh on the power curve this morning, with coal contracts also displaying another decrease. Mild weather has offset a weaker wind generation forecast for the weekend and wind levels are expected to ramp up at the start of next week.

Market close data has revealed that the 1-year forward price for commercial gas decreased, while commercial electricity climbed higher - closing at 41.16ppt and £42.55/MWh, respectively. This can be seen in the graph below. 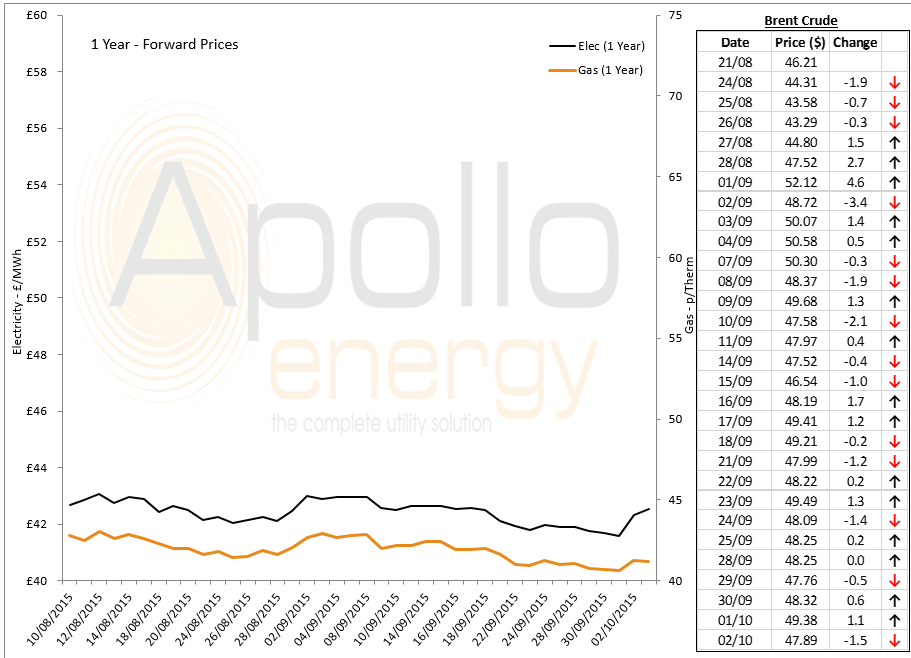 Brent 1st-nearby prices strengthened yesterday and climbed as high as $49.84/b before falling back to around $48/b later in the session. Prices are little changed this morning as fundamentals are similar to yesterday and Brent opened at $47.89/b.