Spot power prices are at similar levels to last week but expected colder weather combined with weak wind generation should lead to a bullish afternoon session; although weaker fuel and gas prices should limit the gains. Gas prices moved higher on Friday due to a higher demand forecast for this week and an under-supplied system. Gas demand has increased today but still remains below the seasonal average and the UK gas system has opened long; as a result prices are set to fall over today's session. Today's prices can also be found in an easy to read table on our 'current UK energy price' page.

Near-curve gas prices displayed an increase on Friday due to an under-supplied system as a result of a drop in overall gas flows and higher demand. Bacton BBL flows were reduced while on-going outages in Norway also limited imports into the UK. Further along the curve prices took a different direction with a scheduled LNG delivery and weakening oil a factor. Most of the power curve followed falling gas which helped to weigh on most far-curve contracts and some nearby. However, Day-Ahead recorded a gain as a weak wind generation forecast, an expected rise in demand and various outages at power plants provided support.

The majority of the gas curve opened lower this morning thanks to a long UK gas system which helped to weigh on the Day-Ahead contract; shedding 0.50ppt from its price. Losses were also observed on the far-curve with weak Brent the main influence. Power contracts followed their gas counterparts closely and opened at a discount, however an increase in demand and a colder weather forecast helped to limit the gains. In terms of the Day-Ahead contract, stable fundamentals helped the prompt record a 1.30ppt loss.

Market close data has revealed that the 1-year forward price for both commercial gas & commercial electricity decreased - closing at 55.98ppt and £50.63/MWh, respectively. This can be seen in the graph below. 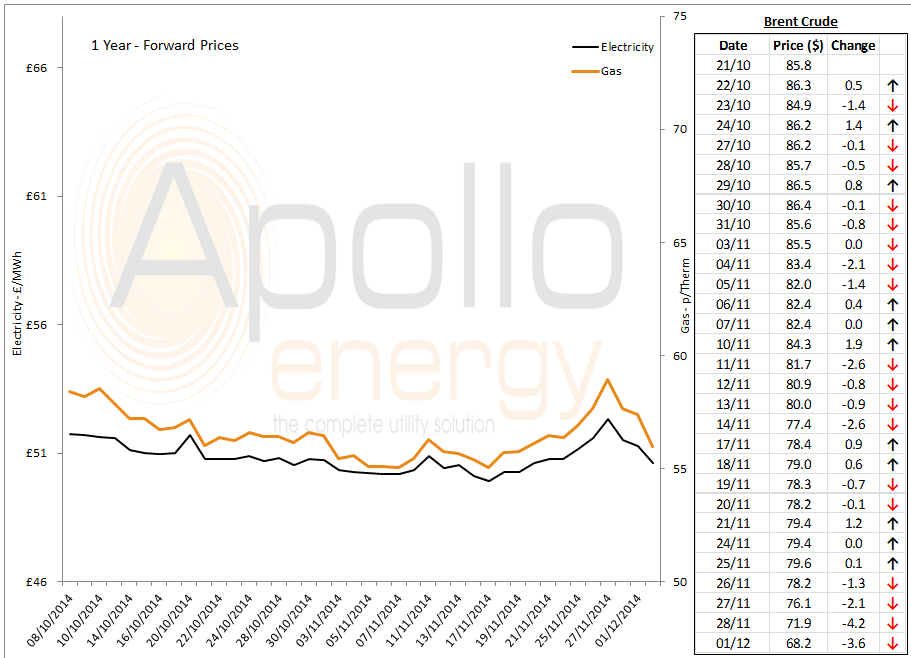 Brent 1st-nearby prices have recorded another significant price-drop of over $3.60/b and currently trade at around $68.3/b this morning. Prices hit a 5-year low over the weekend, reaching their weakest price since October 2009 following the 2008 crisis. Extremely healthy supply levels and talks regarding OPEC output are the main market drivers.