Spot power prices displayed a decrease yesterday due to a drop in demand and improved renewable generation in North West Europe. Prices continued to shed from their price this morning as wind generation in the UK has improved and demand levels are similar to yesterday. Milder temperatures yesterday and weaker oil prices helped to weigh on gas prices throughout Thursday's session. UK gas demand is expected to fall by 30mcm today compared to yesterday with temperatures currently above the seasonal average. However, demand levels are expected to surge next week with the return of colder weather; prices should hold firm this afternoon. Today's prices can also be found in an easy to read table on our 'current UK energy price' page.

Gas prices recorded losses yesterday as the UK gas system was long throughout the day on the back of improved Bacton BBL imports and a drop in demand due to milder temperatures. Losses were also observed on the far-curve with extremely low Brent prices a factor. Power prices followed their gas counterparts closely on Thursday and the downward movement was evident across the curve. Weak oil prices and the usual drop in demand on Fridays were also a factor for the bearish movement. An expected rise in wind generation also offered support to the Day-Ahead contract.

The Asgard facility in Norway has resumed its operations but overall gas flows are down by 51mcm compared to Thursday's levels. Bacton BBL flows have fallen by 20mcm while storage withdrawals from the Rough facility have ceased. This resulted in upward movement across the curve with a few exceptions, with a colder weather outlook providing support on the far-curve. Temperatures are above average today and this has helped to weigh on near-curve power contracts. Further bullish support was provided by healthier supply following the restart of several power plants. Overall movement was quite minimal this morning with the exception of Day-Ahead which added £2.20/MWh to its price as wind generation is expected to fall by 60% on Monday.

Market close data has revealed that the 1-year forward price for both commercial gas & commercial electricity decreased - closing at 57.40ppt and £51.28/MWh, respectively. This can be seen in the graph below. 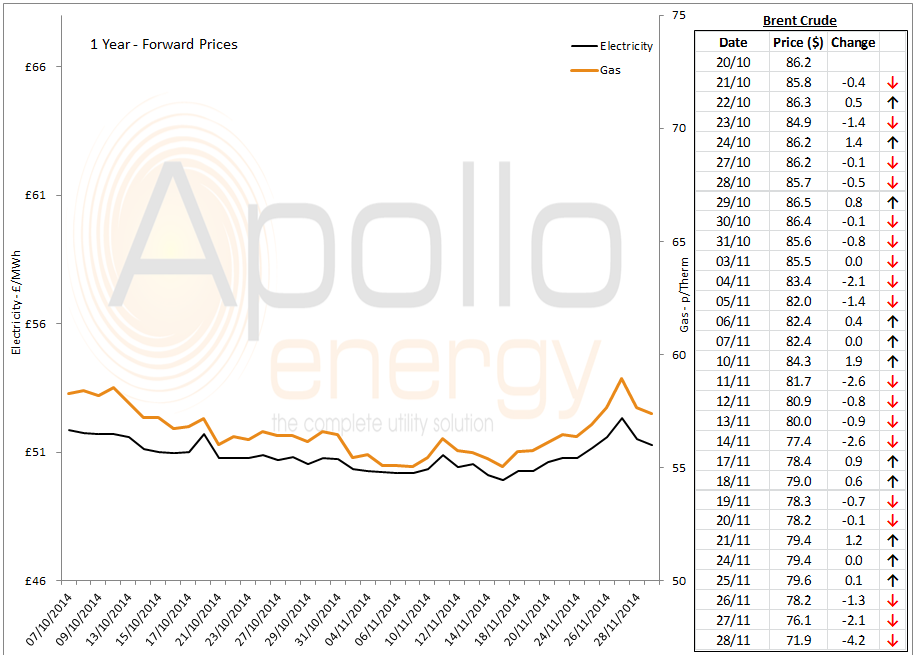 Brent 1st-nearby prices fell by over $5/b yesterday and prices are currently at their lowest point since July 2010; trading at around $72/b.