Spot power prices in major European countries climbed higher yesterday afternoon due to a drop in temperatures which resulted in increased demand levels, assisted by low wind production. Today, healthy nuclear production and slightly higher levels of wind has helped prices move down this morning and the curve should stabilise this afternoon. Gas prices displayed losses yesterday on the back of an over-supplied UK gas system and strong fundamentals in general. Linepack is over-supplied once again this morning despite an increase in demand levels, further losses could occur as a result. Today's prices can also be found in an easy to read table on our 'current UK energy price' page.

Gas prices moved down on Monday's session due to comfortable supply and below average demand which resulted in a long UK gas system. The new Front-Month, January-15 managed to close the session higher than the Day-Ahead contract which could lead to additional storage withdrawals. Elsewhere, the British Pound strengthened against the Euro and Brent fell to a 5 year low. The majority of power contracts followed their gas counterparts on Monday with lower than expected demand levels the main driver of both markets. An expected rise in wind generation also helped the Day-Ahead contract close at a discount, as did improved nuclear availability.

The majority of gas prices opened lower this morning as fundamentals remain healthy which has helped the UK gas system open 12mcm long. These healthy supply levels meant the downward movement filtered through to the far curve although rising Brent helped to limit the losses. Day-Ahead power was the only contract to display significant movement this morning with prices averaging a change of £0.06/MWh in both directions. Day-Ahead recorded a gain of £1.10/MWh as wind generation is expected to drop below 3GW tomorrow.

Market close data has revealed that the 1-year forward price for commercial gas recorded a small gain while commercial electricity decreased - closing at 56.05ppt and £50.53/MWh, respectively. This can be seen in the graph below. 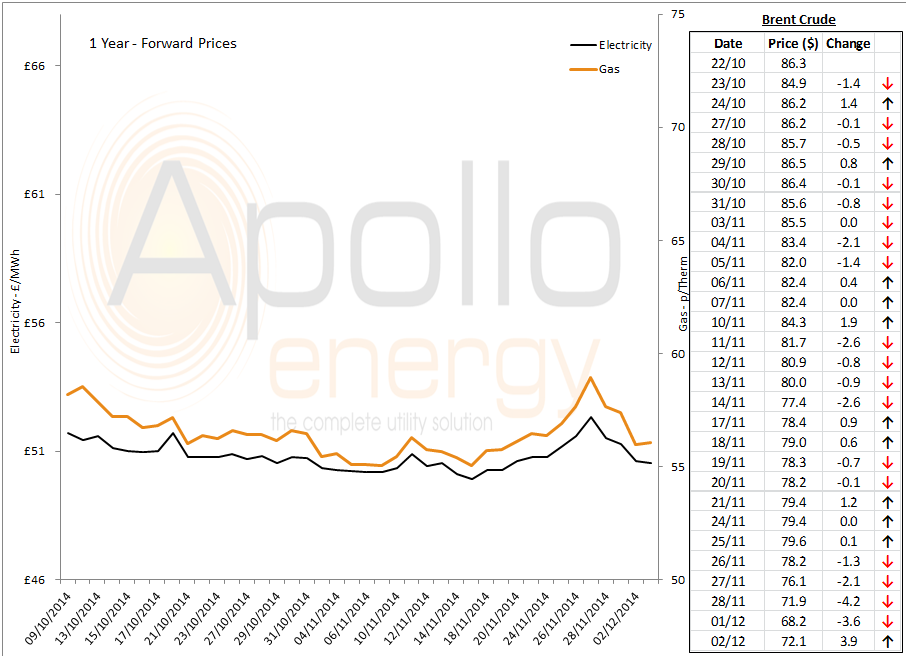 Brent 1st-nearby prices displayed a significant rebound yesterday to recover slightly from a $10/b drop over the last 7 days; Brent currently trades at $72/b.