A rise in nuclear availability added to continued mild weather and healthy supply has helped spot prices fall yet again. However next week should see slightly colder temperatures and weaker wind production which will most likely lead to upward movement. Above average temperatures continue to push demand lower and stock levels have risen as a result; gas prices have decreased on the back of this healthy supply picture. Today's prices can also be found in an easy to read table on our 'current UK energy price' page.

Gas contracts displayed significant price-drops yesterday ranging from 0.55ppt for April-14 and 0.90ppt for Front-Quarter. A sharp drop in Brent prices was the main cause for the bearish movement, while also having an effect on seasonal contracts which registered losses between 0.45ppt and 0.80ppt. Wind generation levels were expected to reach around 8GW today which led to Day-Ahead shedding £2.60/MWh from its price. Further along the curve prices took influence from gas and also decreased.

Day-Ahead gas moved 0.65ppt lower at the start of today's session while the rest of the curve displayed losses of up to 0.20ppt. Front-season opened at a 0.20ppt discount as Brent weakened further. Linepack opened the session at 22mcm long as there was little change to gas flows from yesterday. Power contracts saw mixed movement this morning with Day-Ahead climbing £0.90/MWh higher due to the usual rise in demand on Monday. Most contracts on the near-curve made small losses with Front-Month falling by £0.20/MWh and Front-Season unchanged.

Market close data has revealed that the 1-year forward price for both commercial gas & commercial electricity decreased - closing at 67.26ppt and £52.73/MWh, respectively. This can be seen in the graph below. 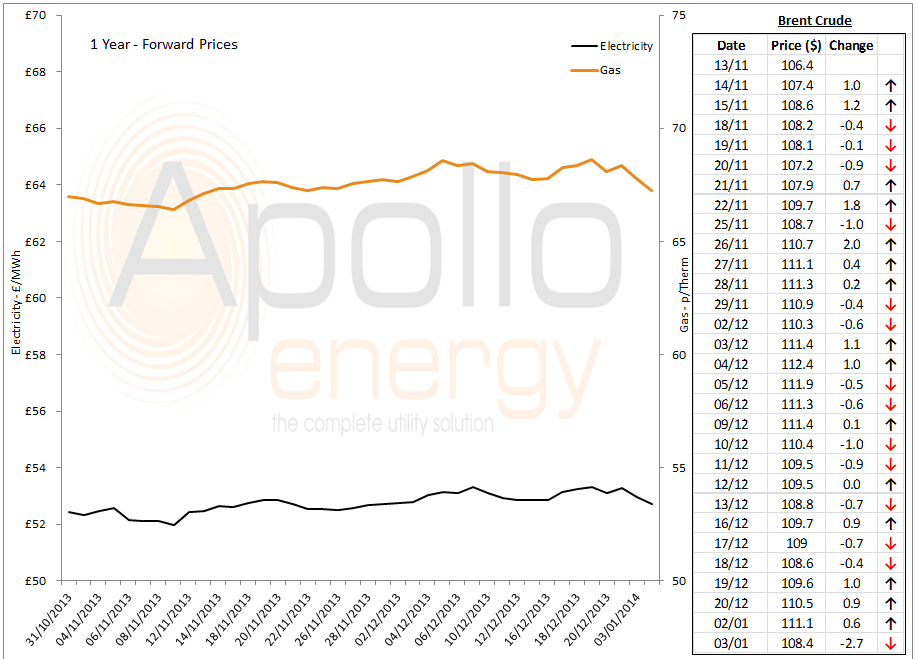