Spot power prices have climbed higher over the last seven days on the back of weak fundamentals, specifically the cold weather which has resulted in above average demand levels. Another bullish session is expected today as strong demand continues and carbon prices have displayed a sharp rise. Gas prices stabilised on Friday following some strong gains in previous sessions which were a result of below average temperatures, while a drop in Norwegian production also offered support. Today, UK demand is expected to rise to 359mcm and outages in Norway are still affecting supply, pushing prices higher. Today's prices can also be found in an easy to read table on our 'current UK energy price' page.

Most gas contracts moved higher on Friday as below average weather was expected to continue over the weekend and into this week. Meanwhile, two outages at Norwegian gas facilities reduced flows into the UK, with no LNG deliveries scheduled for this week. Power prices also strengthened on Friday, dictated by higher demand levels and strengthening Brent. Wind generation was also forecast to drop at the start of this week with a peak generation of around 3.55GW; lending support to the Day-Ahead contract.

Day-Ahead gas increased by 2.90ppt this morning, although Front-Month contracts have moved in the opposite direction as the near-curve failed to display a clear trend. Elsewhere, seasonal contracts have recorded gains between 0.50ppt and 0.70ppt. Movement on the power curve is generally bearish today although some contracts have opened unchanged. A rise in the price of Brent has supported prices on the far-curve, while strong demand and low wind generation has supported the prompt contract.

Market close data has revealed that the 1-year forward price for both commercial gas & commercial electricity moved slightly higher- closing at 46.73ppt and £44.33/MWh, respectively. This can be seen in the graph below. 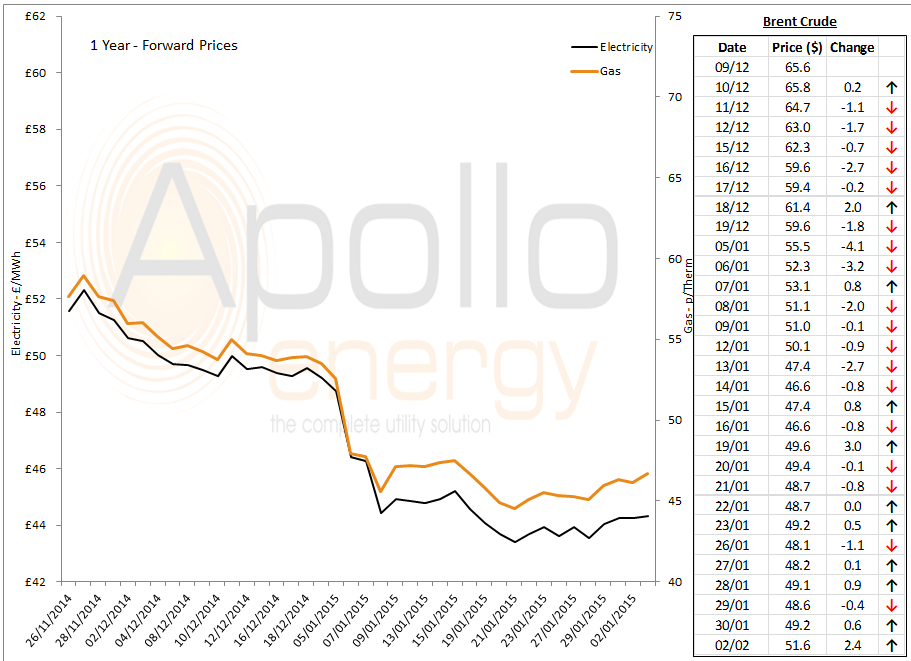 Brent 1st-nearby prices recorded significant gains on Friday and climbed back above $50/b as a result of a drop in US stocks; Brent currently trades at $51.8/b.