Spot power prices continued to move higher yesterday with a strong rebound in Brent and high demand the main market drivers. However, milder temperatures are expected next week which offered support to the bears this morning. Gas prices increased yesterday as cold weather continued to push demand levels higher, although strong storage withdrawals led to some downward movement in the afternoon. Temperatures which are around the seasonal norm are expected to return next week which has helped prices decrease this morning. Norwegian flows are also gradually improving which has helped towards a long UK gas system, leading to a stable-to-bearish outlook. Today's prices can also be found in an easy to read table on our 'current UK energy price' page.

Gas prices took direction from rising Brent and a UK gas system which opened 55mcm short yesterday morning. Outages in Norway and the cold weather resulted in short supply but storage withdrawals helped the system regain length in the afternoon, resulting in downward movement. Storage levels currently stand at 50% full with an LNG delivery expected later in the week. Power prices took direction from their gas counterparts and moved higher at the start of Monday's session. A drop in nuclear availability and reduced wind generation helped Day-Ahead add to its price with coal-generation holding a 37.5% share of the fuel mix.

Gas prices continued to move down this morning following bearish movement yesterday afternoon due to a long UK gas system. The bears were supported by a revised weather forecast with milder weather expected to arrive in the UK next week. The power curve also displayed price-drops and was influenced by the expected drop in demand next week. The losses filtered through to the far-curve but downward movement was somewhat restricted by stronger oil prices.

Market close data has revealed that the 1-year forward price for both commercial gas & commercial electricity decreased - closing at 46.40ppt and £44.00/MWh, respectively. This can be seen in the graph below. 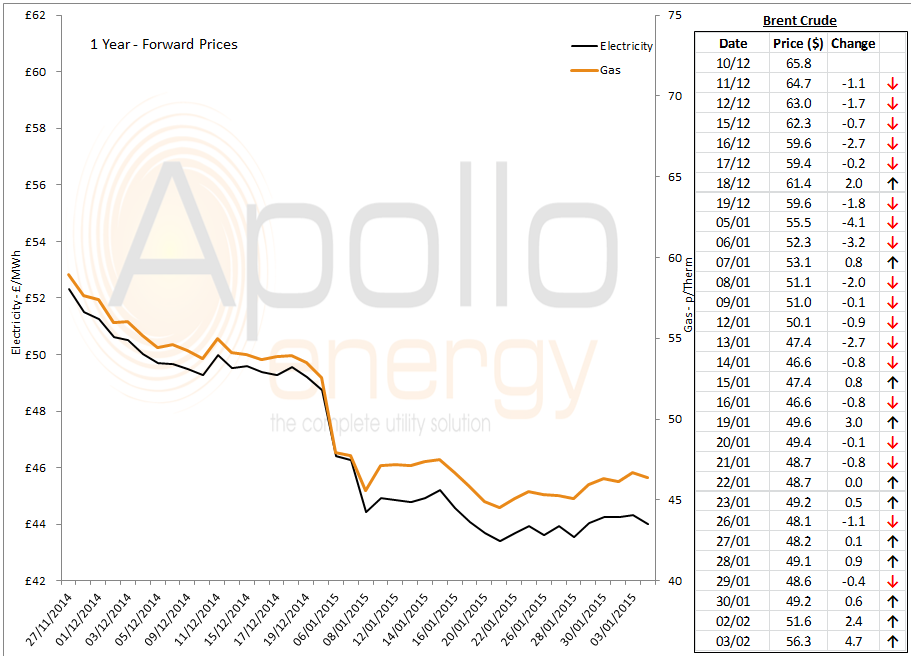 Brent 1st-nearby prices have climbed by over $6/b since the start of Monday's session and currently trade above $56/b. According to traders, prices hit their lowest possible point in January and now a correction is taking place.