Spot power prices were supported yesterday due to high demand levels on the back of cold weather which is expected to continue next week. General fundamentals are healthy but until milder weather returns we should see further price increases. Gas prices climbed higher on Thursday as a drop in Norwegian flows and high demand tightened the UK gas system. A revised forecast shows that the cold weather could last until mid-February, while Norwegian flows are still reduced because of outages. However, production is set to return to normal levels over the weekend and LNG supply is healthy, helping some contracts to decrease today. Today's prices can also be found in an easy to read table on our 'current UK energy price' page.

Cold weather, combined with a rebound in oil prices helped to support the gas curve yesterday. Below average temperatures are set to continue for longer than initially expected while unplanned outages in Norway led to a short gas system yesterday. Rising gas helped to push power contracts higher with increased demand the driver of both markets once again. Meanwhile, stronger Brent and carbon contracts provided additional support on the far curve.

The UK gas system is closer to balance this morning as overall gas flows increased by 10mcm, compared to yesterday's levels. This improved supply picture helped the gas curve to record small losses with the exception of Day-Ahead which added 0.35ppt to its price. In terms of power, wind generation is set to drop by 2.5GW on Monday which led to a substantial increase for the prompt contract. The rest of the curve displayed mixed movement with some contracts following their gas counterparts.

Market close data has revealed that the 1-year forward price for commercial gas decreased while commercial electricity moved slightly higher- closing at 46.13ppt and £44.28/MWh, respectively. This can be seen in the graph below. 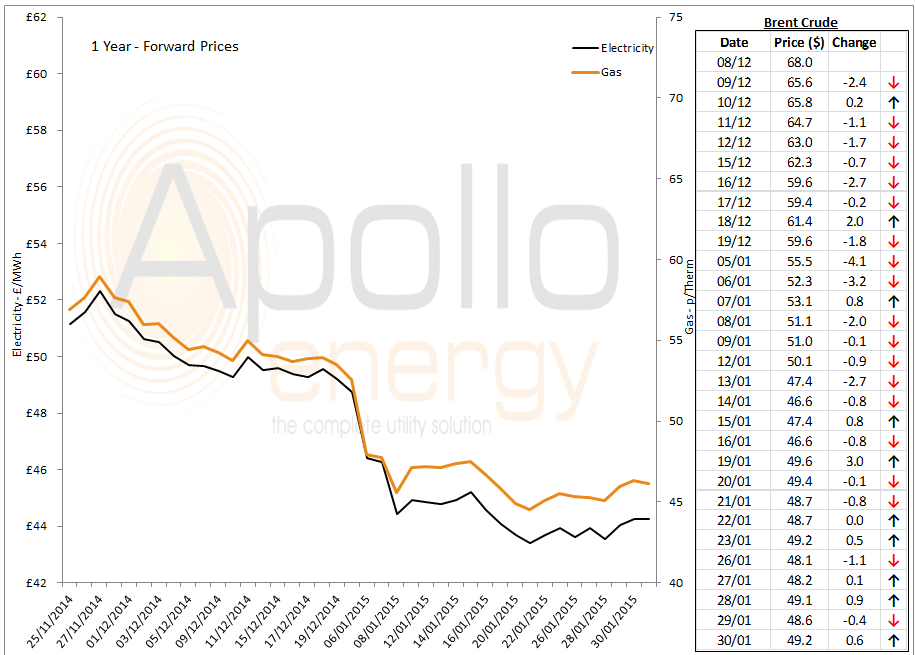 Brent 1st-nearby prices are still attempting to correct themselves but with little support in terms of fundamentals they are struggling to break the $50/b mark. Brent posted a gain of $0.56/b yesterday and currently trade at $49.20/b, with little movement expected today.