There was a slight rise in spot prices with a higher demand from the US but continued Eurozone concerns meant the price didn't increase further. Continue reading for a more in-depth look at today's market prices.

Day-Ahead gas closed at 93.8ppt, a drop of 5ppt and the Easter weekend saw less industrial demand which led to supply levels improving. An increase in US demand led to Brent prices edging over $109.5/bbl but was limited due to Eurozone concerns and very limited supply levels saw Front-Month hit a record high of 74.9ppt. Day-Ahead Power lost £5.70/MWh and closed at £69.30/MWh due to a fall in prompt gas but despite the drop the current price is £20/MWh higher than it was a year ago. The far-curve showed seasonal power prices similar to gas as W-13 fell to £56.2/MWH a decrease of £0.55/MWh.

Day-Ahead gas dropped to 79ppt which is the lowest it has been for 2 weeks thanks to the improved supply level, with recorded LNG flows of 25mcm this morning in South Hook. Brent is also on the rise and was at its highest in 3 weeks opening at $111.03/bbl. Day-Ahead power was £10/MWh lower than it was before the Easter weekend and fell to £58.25; high winds and strong nuclear base load generation were the main causes for the decrease. APi2 coal prices currently stand below $80/tn as the market remains overabundant due to surplus shale gas in the US.

Market close data for 28/03/2013 has revealed that 1-year forward prices for commercial gas and commercial electricity both saw a rise- closing at 70.93ppt and £54.08 respectively. This can be seen in the graph below. 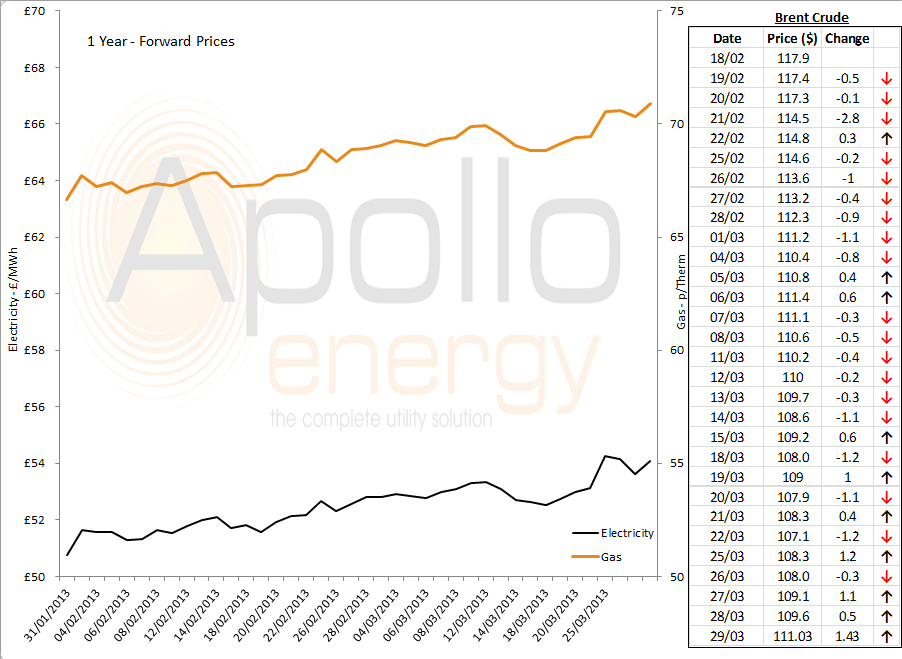 Brent prices were at their highest for 3 weeks and opened at $111.03/bl, a rise of $1.43/bl, a weaker US dollar and claims that there is a more robust demand for oil by the Saudi oil minister led to this rise in price.