There has been little change in spot prices which remain tight as European nuclear power is in short supply, not helped by maintenance being started on the Tihange-1 in Belgium on Saturday, a drop in thermal generation in Germany and low wind production.

Day-Ahead gas saw a drop of 8.25ppt and closed at 90.5ppt while concerns over the supply were helped by improved LNG send outs in the last couple of days. Seasonal prices were bearish as Brent reached a weekly high thanks to positive economic data from the US. Day-Ahead power saw gains of £1.25/MWh due to a higher generation of gas in the fuel mix caused by a drop in wind and a nuclear power failure. Front-Month closed at £55.8/MWh after it dropped £0.70/MWh, seasonal prices followed the currently bearish gas market.

Front-Month April opened up at 74.9ppt, 1.55ppt higher than it closed due to colder weather and the prompt will fall because of LNG send out concerns. Storage levels need refilling which was a main factor why 0.6ppt was added to the closing price of Summer-13. Day-Ahead power opened at £66.50/MWh as demand is low due to the Easter weekend however Front-Month April rose to £57.50/MWh because of the continued cold weather. Rising Brent was possibly the reason W-13 opened up at £56.75/MWh adding £0.60/MWh.

Market close data has revealed that 1-year forward prices for commercial gas and commercial electricity both saw a rise- closing at 70.35ppt and £53.60 respectively. This can be seen in the graph below. 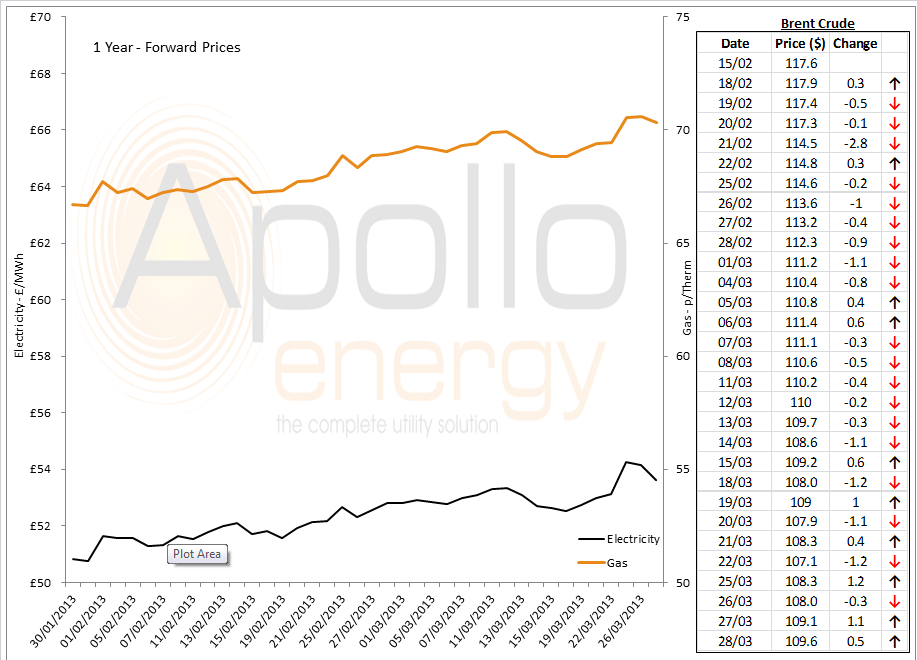 Brent prices saw a slight rise to $109.6/bbl even though the worries over the Eurozone economic data continue and the risk of the EUR/USD being affected by the political problems in Cyprus and Italy. There was a postponement in the South Korean decision to close the crude oil tax loophole which will now be decided on the 1st of July instead of the 1st of April.

Give us a call today to discuss your business utilities and find out what Apollo Energy can do for your business.