Good wind and solar energy production in Germany saw spot prices ease and at one point last night peak hour prices were below overnight power prices, the French market however still remains tight. Temperatures are set to improve by next Thursday which would probably explain why week and month-Ahead prices were down. Continue reading for a more in-depth look at today's energy market prices.

Front-Month gas traded up 0.40ppt and Day-Ahead dropped slightly by 0.40ppt in a session which saw the system remain long. The new Front-season W.13 saw a rise of 0.20ppt after the day's opening. The prompt was lowered thanks to optimistic weather forecasts which should see a healthy rise in temperatures. Day-Ahead closed £1.25/MWh down on its opening price and May-13 fell by £0.50/MWh. The back loading scheme was given EU Support which helped firm up carbon prices and the news that a 650MW nuclear reactor was back in operation after being down for around a week led to the bearish movement.

Langeled's flow rate was at 60mcm, a slight fall from yesterday and a further drop is expected as we enter summer. Storage levels saw an improvement and Day-Ahead saw gains of 0.90ppt and May13 went up by 0.35ppt as the system opened up slightly unbalanced. Day-Ahead power fell but the rest of the curve rose with Front-Month showing a gain of £0.40/MWh whereas Winter13 remained at £56.75/MWh. Wind power is currently generating at 45GWh and remains strong.

Market close data has revealed that 1-year forward prices for commercial gas and commercial electricity both saw a rise- closing at 70.93ppt and £56.50 respectively. This can be seen in the graph below. 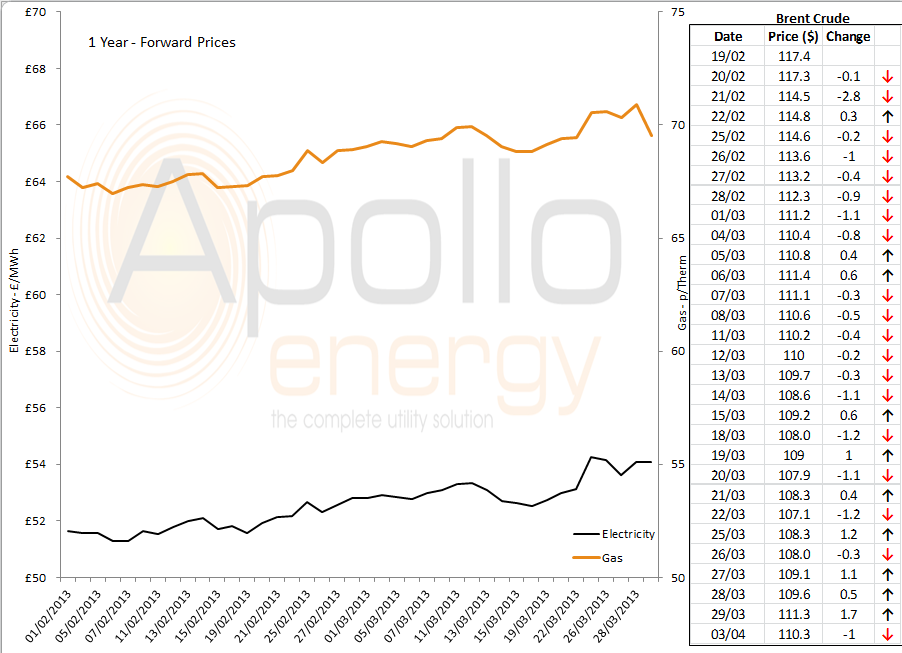 Brent prices dropped to $110.3/bl and Brent timespreads declined to 0.13$/b for April & May13 and to 2.85$/b for June & December13. Gasoline prices saw a large drop in the US and there is still significant risk on the financial market due to weak data from the US, the Eurozone and China.