The German Association of Energy and Water Industries conference yesterday was a major driver of the power market as a number of key announcements were made. 2.7GW of lignite capacity will be gradually introduced in the country, while combined gas and power plants will receive more financial support. These changes could lead to the closure of numerous coal-fired facilities and prices have moved higher as a result. Gas prices increased yesterday as extra cooling measures kept demand levels high, while concerns that Ukraine might stop buying Russian gas continued to offer support. Dutch BBL flows into the UK have fallen to zero this morning as there is more demand elsewhere in Europe. Despite this, the UK gas system has opened long as Norwegian flows and LNG supply have strengthened which could result in losses. Today's prices can also be found in an easy to read table on our 'current UK energy price' page.

Prices on the gas curve lifted yesterday as high demand supported contracts, as domestic consumption increased to 194mcm, which is 44mcm above the seasonal norm. Weaker power generation resulted in an increased reliance of gas-fired generation which played a part in this rise in demand. Elsewhere, storage injections decreased from 34mcm to 28mcm to help balance the system. Power prices recorded further gains with support coming from stronger gas and weaker renewable generation. An unexpected outage at a nuclear facility was offset by a much improved solar production forecast with peak levels of 6.2GW expected today, compared to 2GW yesterday.

Gas prices are stable this morning as the gas system is comfortable despite a halt in BBL flows as LNG and Norwegian supply is healthy. The situation regarding how much Ukraine will have to pay for Russian gas is still up in the air and has failed to have much effect on the market this morning. The power curve has also been subdued in its movement with healthier solar generation reducing the need for expensive gas-fired generation. The heat wave in the UK was short-lived and temperatures have returned to the seasonal norm, while weaker Brent has helped to weigh on some far-curve contracts.

Market close data has revealed that the 1-year forward price for both commercial gas & commercial electricity increased - closing at 45.88ppt and £44.35/MWh, respectively. This can be seen in the graph below. 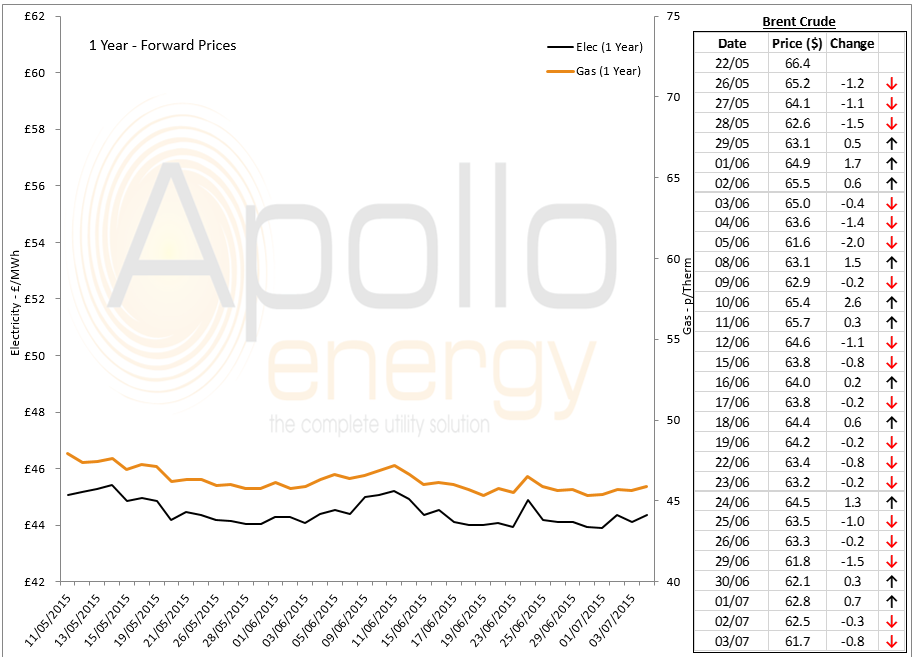 Brent 1st-nearby prices have decreased to just below $61.7/b on the back of this week's rig count report, as active drilling rigs increased for the first time since December.