Supply levels were relatively low last week while consumption has steadily increased over the last fortnight; the spot market was bullish as a result. UK gas fundamentals saw very little change on Friday as lower BBL flows were countered by higher production levels. In contrast, production has fallen slightly this morning while BBL flows have improved so contracts are showing no clear trend at present. Today's prices can also be found in an easy to read table on our 'current UK energy price' page.

The majority of gas contracts made a loss on Friday due to the long system which was helped by healthy supply levels. Storage levels are around 85% and a new LNG delivery is expected at the end of the week which added to the bearish trend. Front-Month power decreased in price following the return of a coal-fired plant leading to sufficient coal supply. A forecast of higher wind generation also helped the contract move down but the loss was limited as several plants are to undergo maintenance this week.

Day-Ahead gas climbed by 0.90ppt due to the cooler weather forecast and little improvement in Norwegian flows; Langeled is currently experiencing flows of around 21mcm. October-13 also went up and added 0.20ppt to its price while increased storage injections saw levels go above 85%, although there is only one month of injections left before the winter period. On the power curve, Day-Ahead fell by £0.60/MWh and opened the session at £46.10/MWh as a result of lower gas-fired generation which held a 17% share of the fuel mix. Meanwhile wind production has improved over the weekend and makes up 11% of the mix. Further along the curve contracts took direction from gas and made small gains despite lower Brent prices.

Market close data has revealed that the 1-year forward price for both commercial gas & commercial electricity decreased - closing at 67.63ppt and £51.60/MWh, respectively. This can be seen in the graph below. 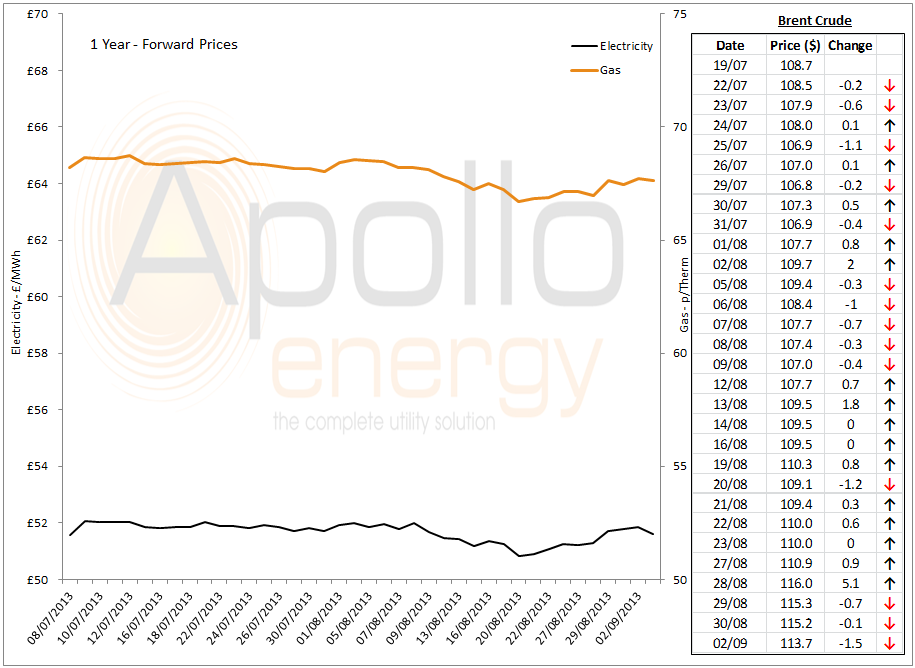 Brent 1st-nearby prices dropped by $1.15/b on Friday closing at $114/b, then fell again this morning by a further $1/b and has now stabilised around $113/b. The Brent/ WTI spread currently stands at -$6.8/b and Syria's influence on prices is expected to be reduced this week due to the delay in the US attack.