There was little movement on the spot market yesterday and UK gas fundamentals also saw no major changes. However UK gas production is higher this morning with the St Fergus Mobil Terminal contributing the most which should see contracts turn bearish. Today's prices can also be found in an easy to read table on our 'current UK energy price' page.

Gas contracts fell yesterday as the Pound strengthened against the Euro, Day-Ahead decreased to 63.4ppt and seasonal contracts dropped by 0.10ppt. The Summer-14 contract ignored news that maintenance in Norway could lead to a significant drop in supply next year. The power curve also displayed a bearish outlook as prices were influenced by gas and unchanged Front-Month coal. Day-Ahead power made a larger drop than Day-Ahead gas which led to the spark spread narrowing by £2.90/MWh.

Gas contracts made gains this morning due to a colder weather forecast with Day-Ahead rising by 0.35ppt and September-13 climbing by 0.05ppt; Front-Month contracts were an exception and showed no change. Flows via the Aldbrough storage facility and the BBL pipeline were at 0mcm although St Fergus contributed 14mcm to the system. Day-Ahead power decreased by £2.50/MWh this morning thanks to higher wind production and the usual drop in demand on Fridays which countered the colder weather forecast. Wind generation is expected to reach a peak of 3GW over the weekend and contracts ignored the fact that 2 units at the Pembroke facility will be offline for the next few days.

Market close data has revealed that the 1-year forward price for both commercial gas & commercial electricity went up - closing at 67.73ppt and £51.83/MWh, respectively. This can be seen in the graph below. 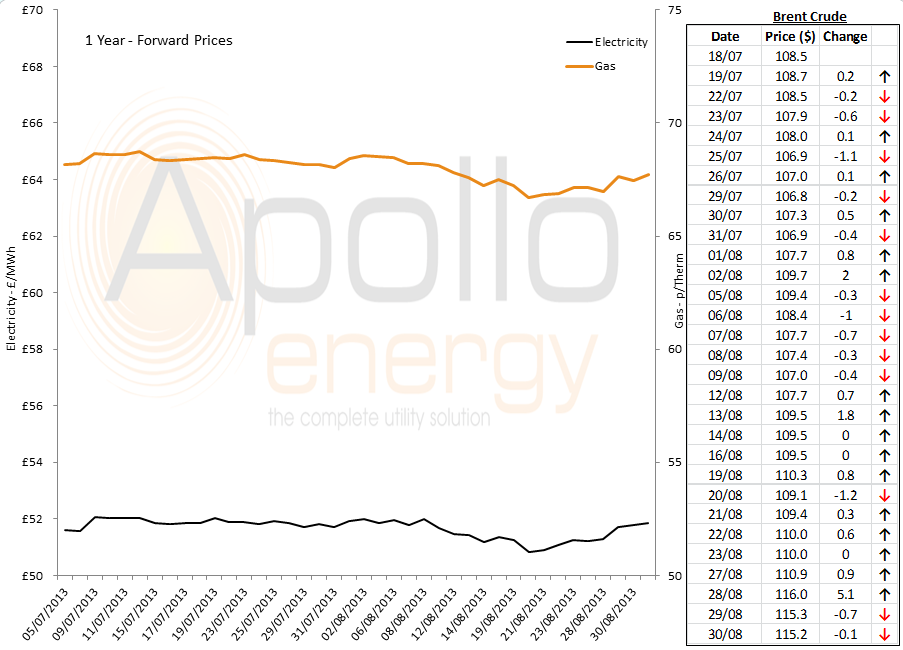 Crude oil prices decreased yesterday even before the UK Parliament voted against military movement. The latest IEA report was the main driver of prices as it showed that the global oil market was in healthy supply. Brent 1st-nearby prices are just under $115/b at present after reaching $117/b yesterday evening.