The spot market turned bullish yesterday due to the forecast of a significant drop in wind generation. The UK gas market saw an improvement in supply as well as a decrease in demand, although the downward movement could be limited by fluctuating BBL flows. Today's prices can also be found in an easy to read table on our 'current UK energy price' page.

Both prompt and near-curve prices went up yesterday helped by cooler weather and thanks to a number of offline plants which underwent maintenance. Day-Ahead added 0.25ppt to its price while further along the curve seasonal contracts followed bearish Brent with Winter-13 falling by 0.20ppt. Power contracts went up due to a drop in wind production with Day-Ahead rising by £1.10/MWh. Further along the curve most contracts decreased as a result of the wider fuels complex while a number of plants went offline or are not running a full capacity.

Gas storage facilities remain in injection mode as UK supply levels are currently above 85% with a month left before the Winter-13 delivery. Langeled flows fell slightly this morning as maintenance continues at a Norwegian gas field. Day-Ahead opened at a 0.15ppt discount and October-13 fell by 0.10ppt despite a short system. Day-Ahead power was the exception to the curve and rose by £0.50/MWh as wind production fell by 20GW and isn't expected to improve until the weekend at least. Coal-fired generation now holds a 41% share of the generation mix after increasing its production by 90GWh.

Market close data has revealed that the 1-year forward price for both commercial gas & commercial electricity went down - closing at 67.30ppt and £51.50/MWh, respectively. This can be seen in the graph below. 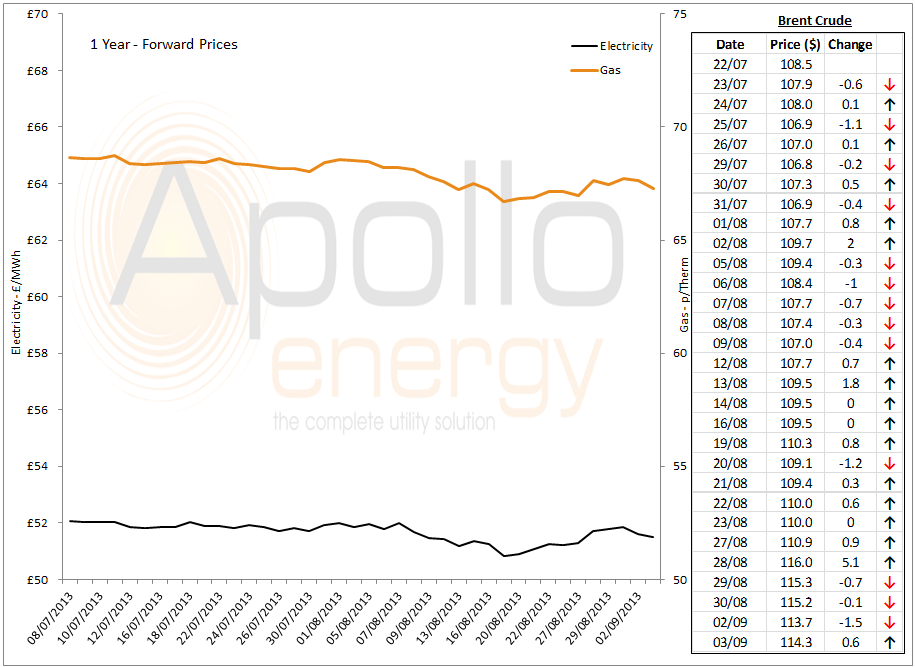 Brent prices went up yesterday after making a series of losses from the end of last week with the Labour Day holiday in the US having an influence. A US congress vote will take place on the 9th September in regards to what action will be taken in Syria; oil prices should remain stable in the meantime.