Spot power prices continued to climb higher yesterday as wind generation remained low across Europe and temperatures are forecast below the seasonal norm for the rest of the week. Prices have posted some losses this morning as renewable generation in the UK has improved and production at a number of power plants has ramped up following the end of maintenance.

Gas prices were supported by stronger demand and reduced supply yesterday, on the back of colder temperatures and higher exports. The UK gas system was close to balance today despite maintenance at North Sea gas fields, as storage injections have decreased; prices are generally stable this morning.

Gas prices increased yesterday, supported by a rise in Brent later in the session and stronger demand levels, with domestic consumption hitting a six-week high of 75mcm. Despite this rise in demand, the UK gas system was balanced as Norwegian supply remained healthy.

Power prices also moved higher with confirmation that the 2GW coal-fired power plant in Eggborough is to close in March 2016. Colder weather this week will also see a rise in demand which offered further support, although renewable generation is expected to improve, offsetting some of the gains.

Gas prices are generally bearish this morning as the UK gas system has opened slightly long due to strong Norwegian supply. Storage injections at the Rough facility have also decreased and will remain low until the 27th of September due to maintenance.

Day-ahead power has decreased this morning as wind generation is set to rise over the weekend and stronger solar production is expected at the start of next week. Meanwhile, capacity has increased at a number of power plants due to the completion of maintenance, helping towards a healthy supply picture. However, consumption levels remain high due to a drop in temperatures which has restricted some of the losses.

Market close data has revealed that the 1-year forward price commercial gas decreased, while commercial electricity posted a small gain - closing at 42.70ppt and £42.98/MWh, respectively. This can be seen in the graph below. 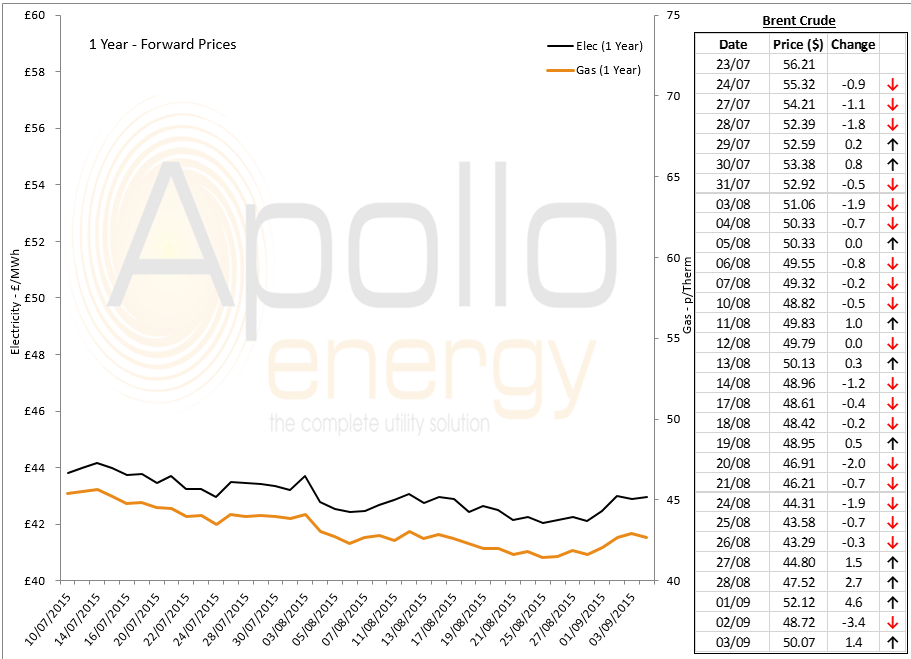 Brent 1st-nearby prices are extremely volatile at present, recording a loss yesterday following a significant rise in previous sessions. Prices settled at around $50.5/b yesterday but fell closer to $50/b overnight.