Spot power prices fell on the back of a higher renewable production forecast for today and ignored numerous outages at coal-fired plants. Downward pressure is also expected for Thursday and Friday as wind and solar production should remain at high levels and there is also a public holiday in Germany. Gas spot prices were bearish thanks to healthy Norwegian supplies although movement was varied on the near-curve. Norwegian supply remains strong today and November-13 prices should continue to move down as a result. Today's prices can also be found in an easy to read table on our 'current UK energy price' page.

Gas contracts moved down by the end of yesterday's session, Day-Ahead fell by 0.90ppt thanks to a system which opened 11mcm long. The start of October should see mild temperatures and the expected arrival of a new LNG delivery on Monday contributed to a bearish gas curve. Front-Month shed 0.60ppt from its price and Front-Season decreased by 0.80ppt. The power curve mirrored gas and losses were made across the board, weaker Brent was one of the main factors for the downward trend. EUA contracts moved up slightly as permit supply will be rather low over next few weeks although this had no influence on power contracts.

Day-Ahead gas made a further loss of 0.10ppt as the system continues to be over-supplied and opened at 21mcm long. The rest of the near-curve went up slightly as stock levels are currently below 90% as we enter the winter season. Front-Month added 0.10ppt to its price while seasonal contracts made gains which ranged between 0.05ppt and 0.40ppt. Numerous power plants are expected to return online or increase their output tomorrow which led to Day-Ahead registering a £1.05/MWh price drop. Front-Month APi2 coal decreased in price but had little effect on far-curve prices which tracked their gas counterpart.

Market close data has revealed that the 1-year forward price for both commercial gas & commercial electricity made a loss - closing at 65.55ppt and £51.48/MWh, respectively. This can be seen in the graph below. 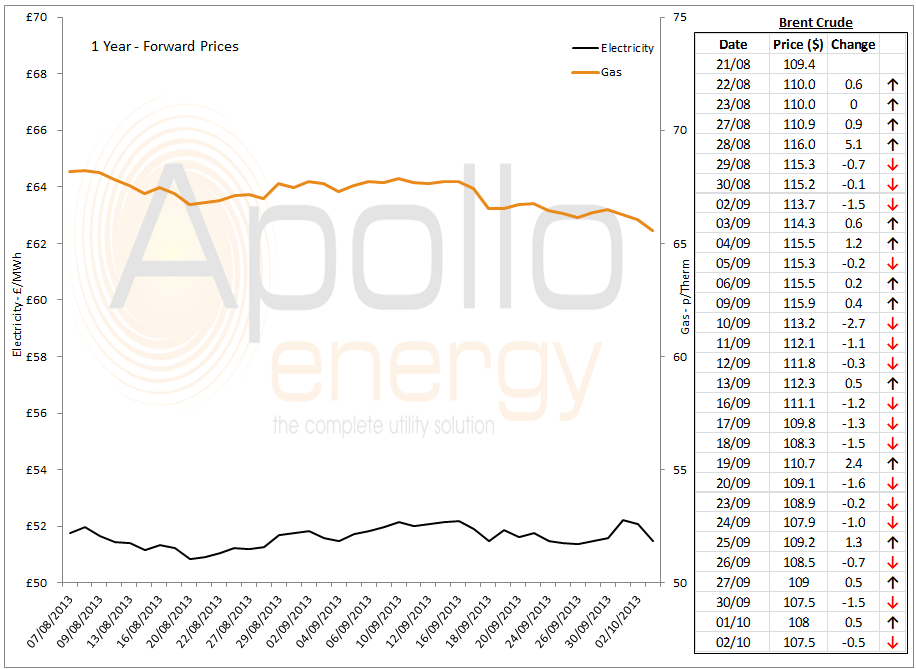 The Brent crude price for November lost $0.43/b yesterday to close at $107.94/b, the loss came as meetings in regards to the US budget are still some way off a conclusion. At present it is unclear how long the US shut down will last and what extent the economy will be impacted.