Spot power prices decreased yesterday on the back of higher wind production and a national holiday in Germany. In terms of gas, an increase in demand helped NBP spot prices move up however the increase was mainly down to higher storage injections which meant movement on the near-curve was limited. Norwegian supply levels improved this morning which should help November-13 prices move down, assisted by mild temperatures. Today's prices can also be found in an easy to read table on our 'current UK energy price' page.

The system opened 5mcm short yesterday and the Day-Ahead contract rose to 63.35ppt as a result. The British Pound continues to strengthen against the Euro which led to an increase in exports to Belgium via the Zeebrugge pipeline. Further along the curve seasonal contracts ignored stronger Brent prices and fell by 0.30ppt. Day-Ahead power fell by £1/MWh with higher wind availability and numerous coal-plant restarts helping drive prices down. The system buy price reached £100/MWh in the afternoon due to several hydro units being brought online at the Sloy facility.

NBP prices took a downward direction this morning as Linepack is expected to remain long today, Day-Ahead fell to 62.4ppt as a result. Langeled deliveries were down on October 2012's average and currently stand at 52mcm compared to October 2012's 58mcm, although this figure should hopefully increase to 70mcm by the end of the month. Storage facilities are currently in injection mode and stocks are being replenished at rate of around 29mcm. In contrast to gas, power contracts made gains of around £0.15/MWh as coal prices increased once again. A forecast of limited wind availability offset the usual drop in demand on Fridays and Day-Ahead opened at a £0.60/MWh premium.

Market close data has revealed that the 1-year forward price for both commercial gas & commercial electricity went up - closing at 65.70ppt and £51.68/MWh, respectively. This can be seen in the graph below. 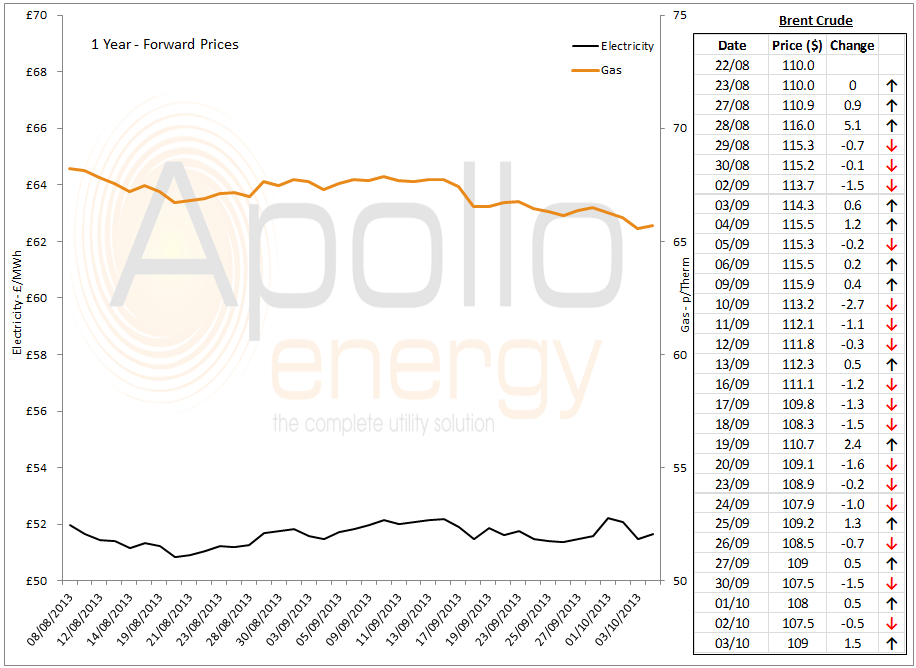 Brent prices opened up around $109/b while WTI gained $2/b to start the day at $104/b taking the Brent/ WTI spread to -$5.2/b. Prices were influenced by the announcement that the Gulf Coast leg of the Keystone XL pipeline will be up and running by the end of the year.