Spot prices increased yesterday on the back of reduced wind production while thermal availability also dropped. Nuclear availability improved somewhat but remains at a record low level for this time of year and in addition 2GW of coal capacities went offline. Wind generation could improve later in the week but could weaken again over the weekend leading to a bullish outlook. Norwegian gas supply saw a significant increase yesterday (275mcm on average) following the return of the Karsto processing terminal and increased by around 40mcm from Friday; gas prices moved down as a result. Today's prices can also be found in an easy to read table on our 'current UK energy price' page.

The final session before the new gas year saw contracts take a bearish direction; influenced by falling Brent and a strong British Pound. Summer-14 fell by almost 0.50ppt and closed at 62.95ppt while Langeled and BBL flows are expected to improve in the coming days which has helped Day-Ahead shed 1ppt from its price to close at 63.40ppt. Power prices mirrored gas contracts and registered numerous losses, improved wind production and the return of two nuclear reactors saw Day-Ahead fall to 47.25ppt. Further along the curve prices decreased thanks to a softer wider fuels complex.

The start of the new gas year saw a bullish sentiment across the gas curve despite stronger Langeled flows of 50mcm a day and a healthier LNG outlook which saw a reduction in storage withdrawals. Weaker Brent failed to have an effect on the Far-Curve as most contracts made small gains similar to their gas counterparts. Day-Ahead power fell by £0.25/MWh as a consequence of higher wind availability which led to expensive gas-fired generation holding a smaller share of the fuel mix. However Front-Month went up slightly and took influence from gas prices.

Market close data has revealed that the 1-year forward price for commercial gas made a loss while commercial electricity went up - closing at 66.08ppt and £52.10/MWh, respectively. This can be seen in the graph below. 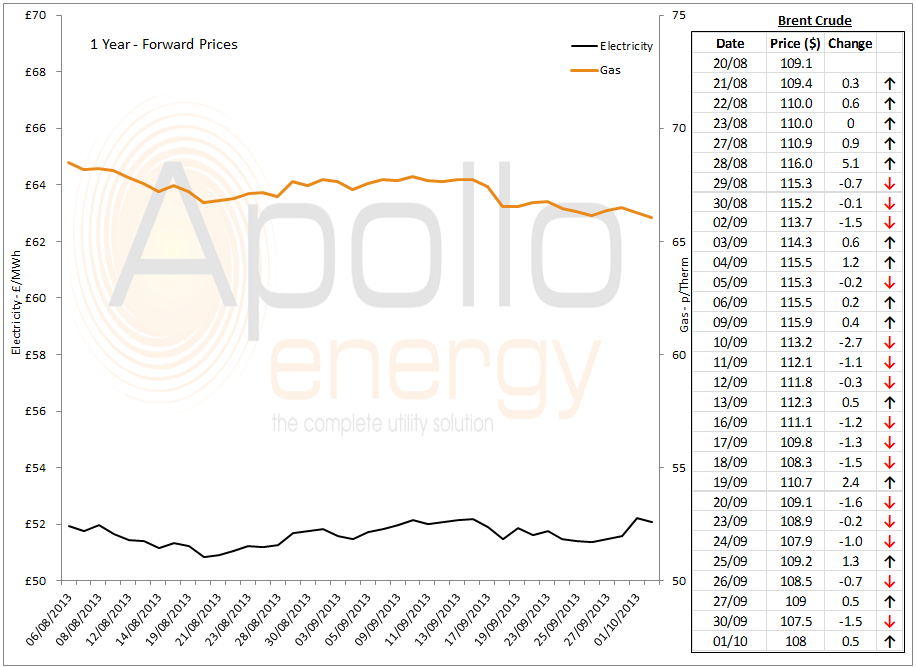 The US federal budget issue was the main driver of prices yesterday and helped prices take a bearish direction with Brent losing $0.26/b. WTI fell by $0.54/b and the WTI/ Brent spread still remains around -$6/b.