Spot power prices were slightly higher yesterday due to several unplanned outages at power plants and continued weak wind generation. Today, renewable production has marginally improved but still remains rather low. However, temperatures are expected to be mild for the next few days which should lead to some bearish movement. Gas prices moved higher yesterday as a result of a drop in LNG send-outs, although the UK gas system was long for most of the day due to lower demand. Norwegian output has ramped up to around 300mcm and resulted in a long system, while Russian supply via Ukraine is also stable; price-drops are expected this afternoon. Today's prices can also be found in an easy to read table on our 'current UK energy price' page.

Gas prices increased yesterday in the new gas year's first day of trading with reduced LNG flows via South Hook a factor. Elsewhere, improved Dutch production levels has widened the spread between prices in the UK and Netherlands. The power curve displayed gains yesterday as nuclear availability decreased and wind generation in the UK remains low. Day-Ahead closed at 44.80ppt as wind production was not expected to improve much today, while Front-Month ended the session at   50.10ppt.

This morning near-curve gas prices have decreased with Front-Month recording a loss of 0.30ppt due to healthy supply levels. Further out, seasonal prices have moved slightly higher and have ignored weakening Brent. Day-Ahead power fell by £2.35/MWh this morning as wind generation levels are expected to ramp up tomorrow. The rest of the curve displayed mixed movement as Front-Month added £0.30/MWh to its price and Q2-15 fell by £0.20/MWh. A nuclear power unit is also expected to return online today at reduced capacity but a coal-fired facility is expected to come offline until Monday.

Market close data has revealed that the 1-year forward price for both commercial gas & commercial electricity decreased - closing at 58.68ppt and £52.03/MWh, respectively. This can be seen in the graph below. 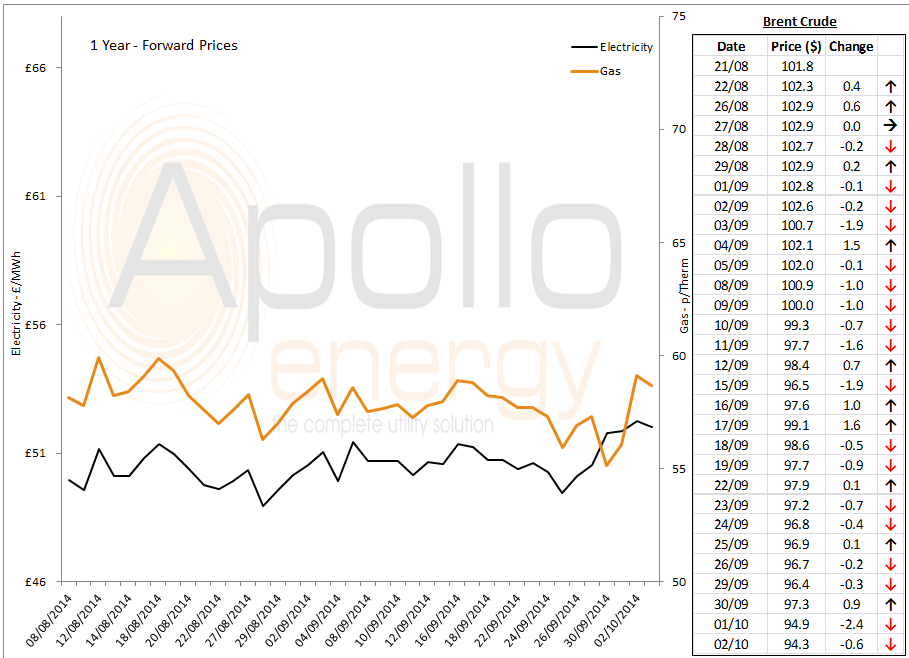 Brent 1st-nearby prices inched higher yesterday afternoon following a reduction in US crude stocks. Brent now trades at its lowest price for two years, currently standing at around $94/b.