Spot power prices inched higher yesterday due to a reduction in nuclear availability on the continent due to unplanned outages. However, prices are expected to decrease today as nuclear generation has reverted back to healthy levels and renewable production is on the rise. Gas prices were bearish on Thursday as supply levels remain healthy and demand is weak, cancelling out Wednesday's gains. Temperatures are expected to be mild throughout October but a slight drop is expected over the weekend which has provided support to the prompt. However, the UK gas system is well-supplied and the forecast of a warm October will push the majority of prices down today. Today's prices can also be found in an easy to read table on our 'current UK energy price' page.

Gas storage levels remain healthy at the start of October as injections into the system continue, which in turn led to bearish movement for prices yesterday. Storage levels stand above 95%, while the rest of the main European countries could also boast levels of above 90%. The Day-Ahead contract moved down yesterday and settled at 51.05ppt as milder temperatures were expected once again on Friday. Day-Ahead power recorded a loss with the usual drop in demand on Friday and stronger wind production the main drivers. Front-Month closed at £49.80/MWh as a mild weather forecast and ample supply pushed the majority of contracts lower.

Temperatures are expected to remain above average until the end of October, while an additional LNG delivery is also expected today. As a result most near-curve contracts opened lower with the losses ranging between 0.05ppt and 0.65ppt. The UK gas system opened 14mcm long and was helped by the usual drop in demand on Fridays. Mixed movement was displayed on the power curve this morning and despite an improved wind production forecast the Day-Ahead contract gained £0.30/MWh. The prompt contract instead took direction from the expected increase in industrial demand on Mondays, as is the norm.

Market close data has revealed that the 1-year forward price for both commercial gas & commercial electricity decreased - closing at 58.65ppt and £51.78/MWh, respectively. This can be seen in the graph below. 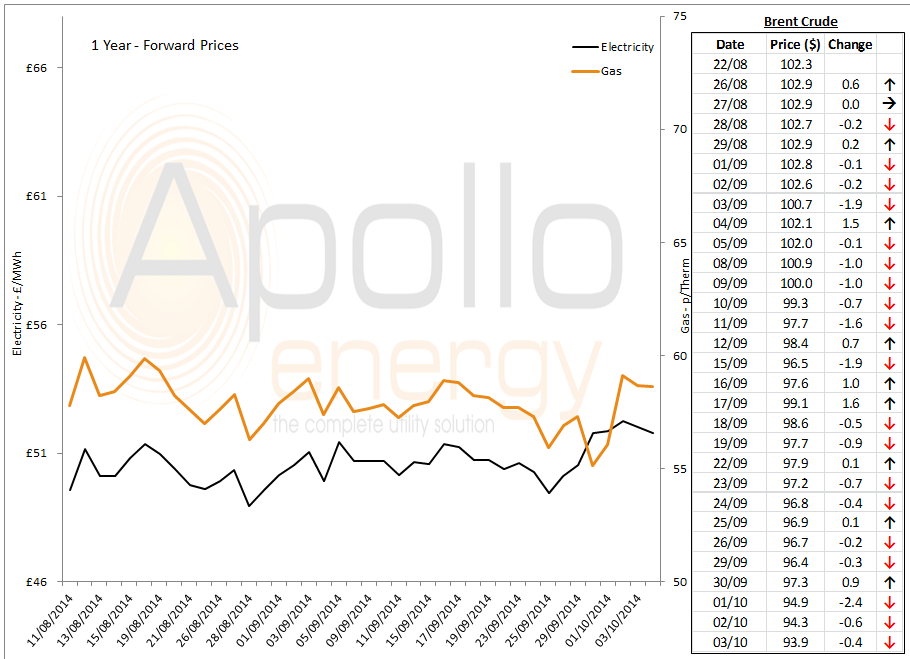 Brent 1st-nearby prices recorded a loss of $0.38/b and currently trade at $93.88/b with strong supply the main factor.