Spot power prices have decreased this morning as the supply/ demand outlook across Europe remains comfortable. Thermal capacities have increased, while a number of nuclear power plants are expected to return online as maintenance is scheduled to end; wind generation is also set to peak at around 5GW tomorrow.

Gas prices ended Friday's session at a discount as mild weather resulted in weaker demand and an over-supplied system. Prices opened slightly higher this morning with colder weather expected later in the week, resulting in a rise in demand, while Norwegian supply has also dropped.

Power prices followed their gas counterparts on Friday and moved down as healthy supply and below average demand weighed on contracts across the near-curve. Generation levels were also set to rise at the start of this week with wind levels expected to ramp up on Monday and Tuesday.

Day-Ahead gas increased this morning as temperatures are expected to drop before the end of the week, which should lead to a significant rise in consumption. The UK gas system is also undersupplied this morning as Norwegian flows have weakened following an unplanned outage.

Near-curve power prices have moved higher this morning with direction coming from stronger gas and fuel contracts. However, stable fundamentals have helped prices further along the curve to move down with nuclear availability also set to rise with scheduled maintenance at power plants set to be completed.

Market close data has revealed that the 1-year forward price for both commercial gas & commercial electricity moved down - closing at 41.16ppt and £42.55/MWh, respectively. This can be seen in the graph below. 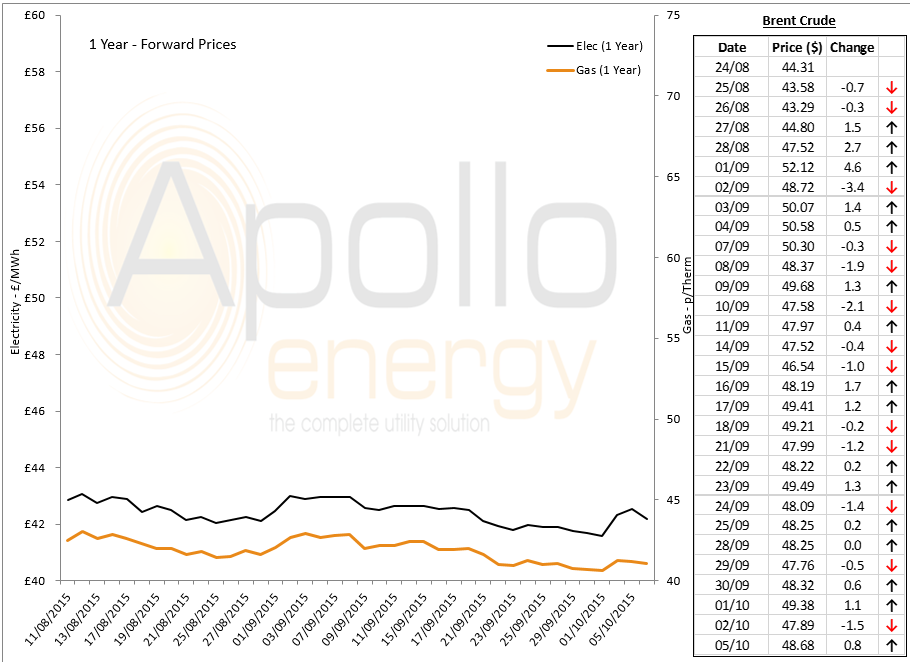 Brent 1st-nearby prices climbed higher over the weekend, rising by over $1/b on the back of a weak US jobs report.