Spot prices moved higher today as cold weather and a decrease in renewable production has offered support to the bulls. European temperatures are expected to improve slightly later in the week and wind generation should also ramp up; prices should drop as a result. On Friday an over-supplied system helped gas prices fall despite reduced Norwegian flows due to an unplanned outage on Thursday. UK LDZ demand is 15mcm higher today as temperatures are expected to remain below average. Norwegian output has improved with Langeled flowing at around 70mcm, although this figure is expected to decrease later in the day which could lead to further gains. Today's prices can also be found in an easy to read table on our 'current UK energy price' page.

All near-curve contracts except Front-Month made losses on Friday with Day-Ahead falling by 0.85ppt on the back of an expected increase in Langeled flows over the weekend. Front-Month strengthened and took influence from climbing Brent which went up by $0.53/b as the US economy was boosted by Black Friday sales. Near-Curve power prices also displayed bearish sentiment as Day-Ahead closed at a £0.60/MWh discount. Further along the curve prices took direction from their gas counterparts with Winter-14 moving £0.10/MWh higher, Summer-15 adding £0.15/MWh to its price and numerous other contracts showing no change.

Day-Ahead gas increased by over 1ppt this morning as Linepack began the session 13mcm short. UK temperatures are currently above the seasonal average but could fall as the week goes on. Norwegian flows improved from Friday's levels as the Nyhamna outage was resolved over the weekend although LNG output fell and no deliveries are expected this month. Contracts across the power curve climbed higher at the start of today's session with Day-Ahead increasing by £3.00/MWh following a decline in wind generation which isn't expected to improve until Thursday. Meanwhile, further along the curve the upward movement of seasonal contracts was limited by falling Brent.

Market close data has revealed that the 1-year forward price for both commercial gas & commercial electricity went up - closing at 67.85ppt and £52.80/MWh, respectively. This can be seen in the graph below. 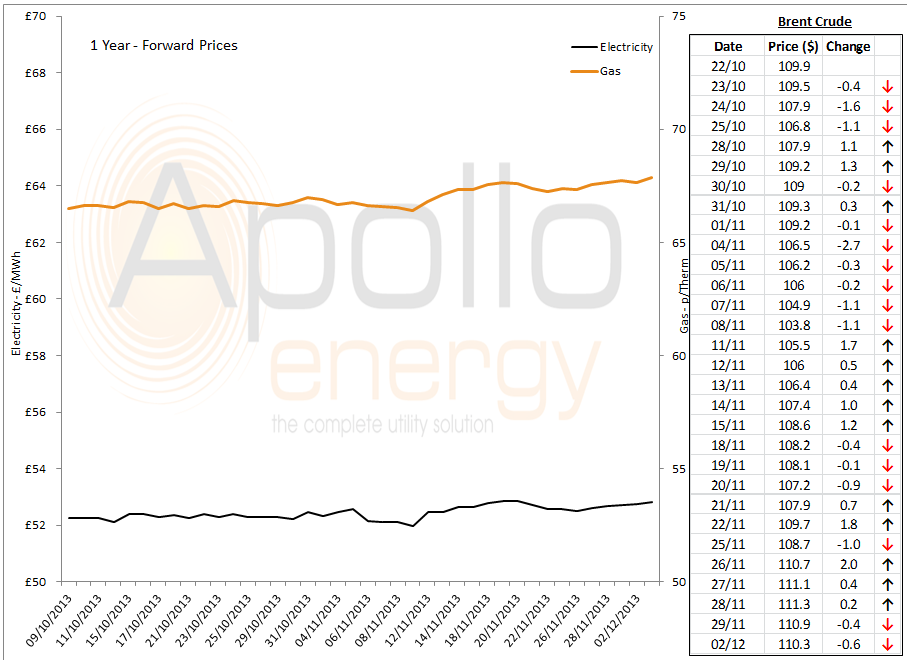