Spot prices remain high with the colder weather pushing up demand levels, stronger clean gas costs have also helped support prices but healthier wind generation has restricted the gains somewhat. The unplanned outage at the Ormen Lange gas field has reduced Norwegian flows by 50mcm which has resulted in higher gas prices, the gains were also assisted by colder temperatures. The outage in Norway is expected to be resolved tomorrow but for now Norwegian flows are still down by 45mcm. However, stronger BBL and UK interconnector output has led to a long system this morning helping gas prices move down. Today's prices can also be found in an easy to read table on our 'current UK energy price' page.

Day-Ahead gas closed at a premium yesterday and added 0.10ppt to its price as Langeled flows dropped to around 20mcm. The rest of the curve displayed a bearish sentiment with losses ranging from 0.10ppt for Winter-14 to 0.45ppt for Winter-15. Weaker Brent was the main driver of prices on the far-curve as was the strengthening British Pound. The usual drop in demand on Fridays and improved wind production resulted in a £2.90/MWH loss for the Day-Ahead contract. The rest of the curve also moved down as prices took direction from gas and falling Brent.

On the gas curve Day-Ahead moved 0.15ppt higher despite a long UK gas system after a slight improvement in Langeled flows. Front-Month fell by 0.10ppt while the rest of the near-curve strengthened.   Contracts on the far-curve showed little change despite Brent making another loss. Day-Ahead power opened £2.05/MWh lower on the back high wind generation levels while movement on the rest of the curve was mixed. Several coal and nuclear plants went offline which offered bullish sentiment but this was offset by weaker Brent and APi2 coal prices.

Market close data has revealed that the 1-year forward price for commercial gas fell slightly while commercial electricity made a small gain - closing at 67.65ppt and £52.75/MWh, respectively. This can be seen in the graph below. 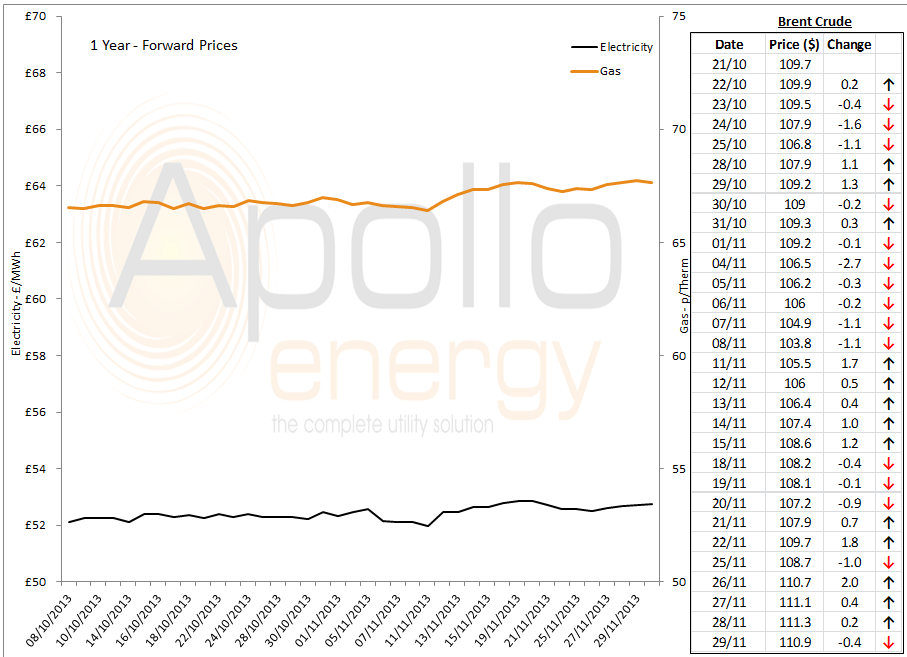 Brent 1st-nearby prices remained around $111/b yesterday before losing almost $0.45/b by the end of the session's close. WTI sits just above $92/b and Syrian supply concerns have been offset by improved output from Iran following the recent nuclear agreement.