Yesterday spot prices closed at a premium as a result of cold temperatures leading to increased demand, while stronger gas prices also helped contracts move higher. Today there has been a slight improvement in wind production but the continued cold weather limited any losses. Gas prices held firm yesterday as a reduction in Norwegian flows had little effect on the UK gas system which was long throughout the session. Today prices moved up because of higher demand levels, despite a healthy supply outlook. Today's prices can also be found in an easy to read table on our 'current UK energy price' page.

Norwegian flows were limited following a few outages at gas fields, this had a significant impact on flows going into mainland Europe but the UK was unaffected. Day-Ahead displayed practically no change as the system was long for most of the day, while Front-Month climbed 0.30ppt higher. Day-ahead power rose by £2.00/MWh and took influence from the higher gas prices, colder temperatures in the UK and limited wind production. Front-Month increased by £0.05/MWh, February-14 opened unchanged and the rest of the curve registered small gains. Expensive gas-fired generation was required to make up for the drop in wind generation which added to the curve's bullish sentiment.

The gas curve saw price increases across the board despite a long UK gas system and a better outlook in regards to Norwegian flows. The Rough storage facility started the session with a withdrawal rate of 16mcm while both interconnectors saw improved output of around 5mcm. On the power curve, Day-ahead decreased slightly following improved wind generation levels, although the colder weather restricted the losses somewhat. Monthly contracts all went up with January-14 registering the largest gain of £0.45/MWh. Several power units remain offline including a nuclear reactor at Heysham and a coal-fired unit at Fiddler's Ferry.

Market close data has revealed that the 1-year forward price for both commercial gas & commercial electricity went up - closing at 68.15ppt and £53.05/MWh, respectively. This can be seen in the graph below. 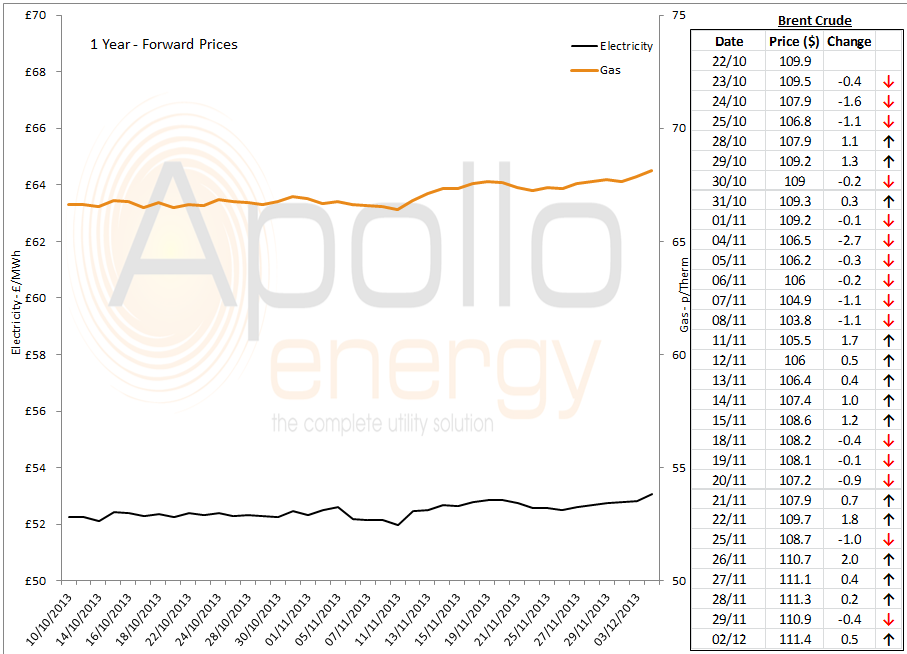 Yesterday Brent 1st-nearby prices failed to register much movement, adding just $0.04/b. This morning Brent climbed by $1.32/b following strong economic growth in the US and China.