Spot prices remain lower than usual for this time of year due to mild weather leading to lower consumption levels. Thermal and renewable energy production has improved which has resulted in a healthy supply picture; however stronger coal prices could push spot prices higher later today. The UK gas system was over-supplied on Friday which pushed prices lower, the bearish sentiment was also helped by a mild weather forecast and stronger Norwegian flows. UK LDZ demand fell by 4mcm today and remains 14.2% lower than the seasonal average. Despite this lower demand the system opened short this morning following a drop in Langeled and BBL flows; prices could climb higher as a result. Today's prices can also be found in an easy to read table on our 'current UK energy price' page.

Gas prices closed Friday's session at a discount as the system remained long throughout the day, also helped by above average temperatures. Day-Ahead and Front-Month decreased by 0.15ppt while seasonal contracts fell by 0.40ppt on the back of weaker Brent prices. Power prices took a different direction to gas as Day-Ahead climbed higher and only a small number of contracts displayed a loss. A drop in wind generation over the weekend was the main cause for this bullish movement but production should improve this week.

The UK gas system opened 16mcm short this morning as Langeled flows fell by 12mcm; this helped Day-Ahead open 2.15ppt higher. February-14 and March-14 both rose by 1ppt, while contracts further along the curve also increased with Winter-14 rising by 0.45ppt and Q2-14 adding 0.70ppt to its price. Day-Ahead power opened £0.75/MWh lower as wind generation has returned to its high levels on Friday, in excess of 7GW. Front-Month and March-14 both moved higher while sentiment on the rest of the curve was mixed. The bullish influence of gas was countered by weaker coal prices which decreased by $0.65/tn.

Market close data has revealed that the 1-year forward price for both commercial gas & commercial electricity climbed higher - closing at 67.48ppt and £52.88/MWh, respectively. This can be seen in the graph below. 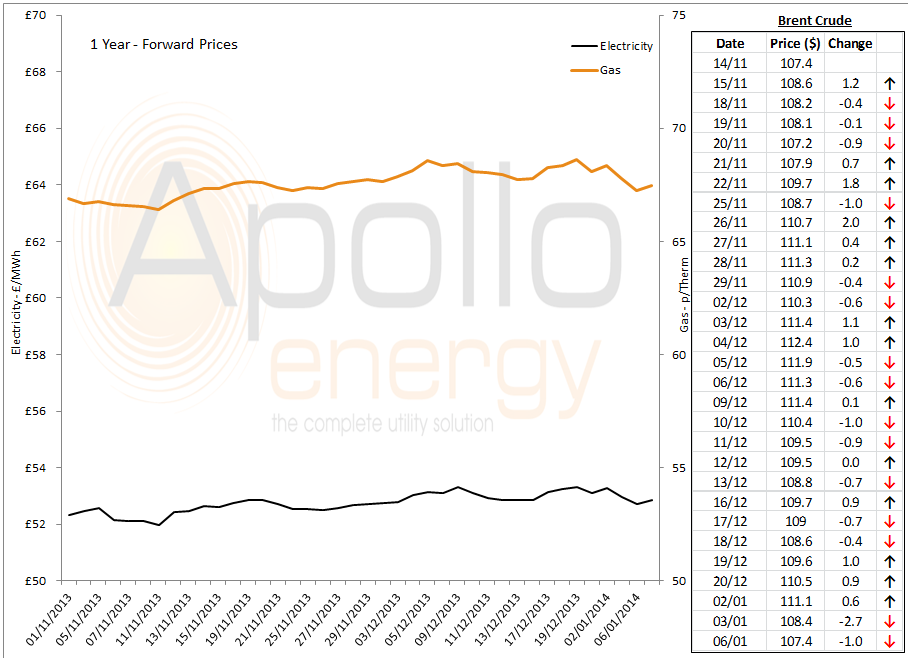