Spot power prices recorded further losses over the weekend as temperatures were relatively mild once again in the UK. Prices are expected to stabilise today as no major changes are expected for fundamentals. Gas prices decreased further on Friday as demand levels are expected to be lower at the start of February. UK LDZ demand is 17mcm lower today compared to Friday although the gas system opened short this morning on the back of reduced LNG output and storage withdrawals. The weaker supply picture should be offset by above average temperatures and as a result no upward movement is expected today. Today's prices can also be found in an easy to read table on our 'current UK energy price' page.

Gas contracts moved down on Friday with Summer-14 incurring a 0.70ppt loss and April-14 dropping by 0.55ppt. Summer contracts fell below the 60ppt mark as they ignored the release of summer maintenance plans which should only see two terminals affected. Lower demand levels and steady Norwegian flows also assisted the bears. Power prices decreased but the losses were less significant than the ones made by gas contracts. Prices fell by as much as £0.45/MWh which has resulted in the spark spread widening. Wind production saw record levels of above 6GW on Friday although two nuclear reactors are not expected to return until mid-February.

Day-Ahead gas opened at a 0.45ppt discount while Front-Month shed 0.50ppt from its price as most contracts started today's session lower. Front-quarter was an exception to the bearish trend and moved 0.25ppt higher. The UK gas system opened 14mcm short, later moving to just 5mcm short with Langeled output falling to 66mcm. On the power curve, Day-Ahead climbed £1.60/MWh higher as wind generation is expected to drop tomorrow. The rest of the curve displayed minor movement, Summer-14 and Summer-15 displaying the largest change with a £0.30/MWh price drop.

Market close data has revealed that the 1-year forward price for both commercial gas & commercial electricity decreased - closing at 63.16ppt and £49.75/MWh, respectively. This can be seen in the graph below. 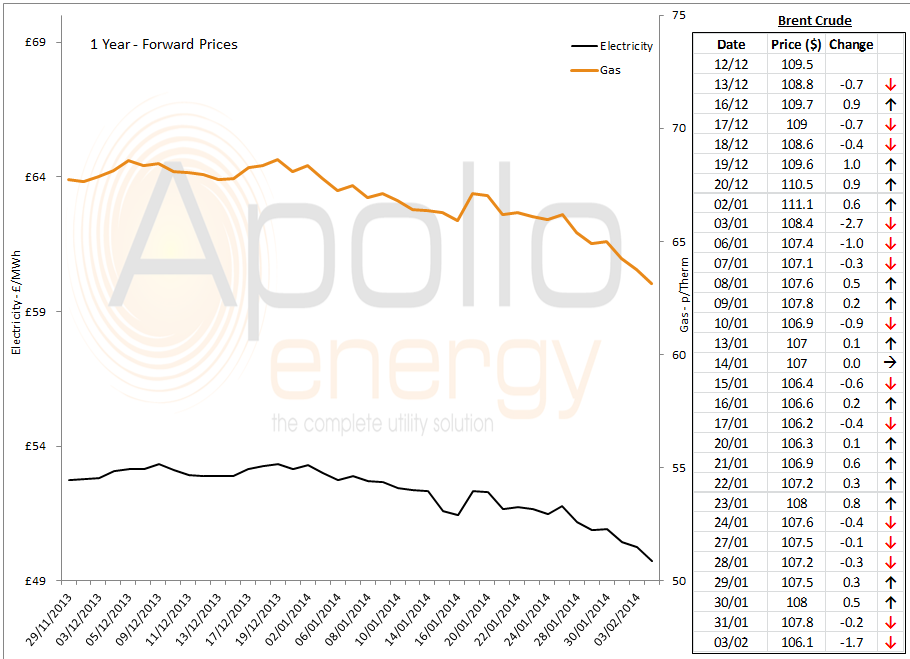 Brent 1st-nearby prices fell by $1.55/b on Friday and reached its lowest price for two weeks, ending the session at $106/b. The strengthening US Dollar and poor economic data from China weighed on prices with WTI falling by $0.74/b; taking the Brent/ WTI spread to -$9/b.