A further decrease in spot power prices is expected today as February contracts have dropped much lower on the back of a milder weather forecast. However temperatures should be around average levels at the start of next week which has offered some support. Gas prices decreased despite demand rising to its highest level so far this winter, prices took influence from a healthy system and strong flows into the UK. Today UK LDZ demand is higher than the seasonal average for the second consecutive day but should drop over the weekend. Prices could move down again during today's session due to lower storage withdrawals and an improved weather forecast. Today's prices can also be found in an easy to read table on our 'current UK energy price' page.

Gas contracts strengthened across the board yesterday with Day-Ahead recording the largest gain of 0.40ppt. Price increases for seasonal contracts ranged from 0.10ppt for Summer-15 and 0.20ppt for Summer-14 and took influence from rising Brent. Power prices followed a similar trend to gas but the gains were less prominent with Day-Ahead rising by £0.30/MWh. Summer-14 registered the most significant gain of £0.50/MWh, while Summer-16 was the only bearish contract and lost £0.25/MWh. Improved wind generation levels were cancelled out by a drop in nuclear availability.

The gas curve displayed downward movement this morning with Day-Ahead dropping 1.30ppt and seasonal contracts falling by as much as 0.60ppt. The bears were in control of the curve despite a short UK gas system and a reduction in flows. Milder temperatures are still the main market driver as the UK is expected to avoid particularly cold weather next month. The power curve followed its gas counterpart and Day-Ahead shed £2.20/MWh from its price as improved wind generation offset the usual rise in demand on Mondays. Two nuclear power units also went offline yesterday but again this was countered by strong wind production.

Market close data has revealed that the 1-year forward price for both commercial gas & commercial electricity decreased - closing at 63.76ppt and £50.25/MWh, respectively. This can be seen in the graph below. 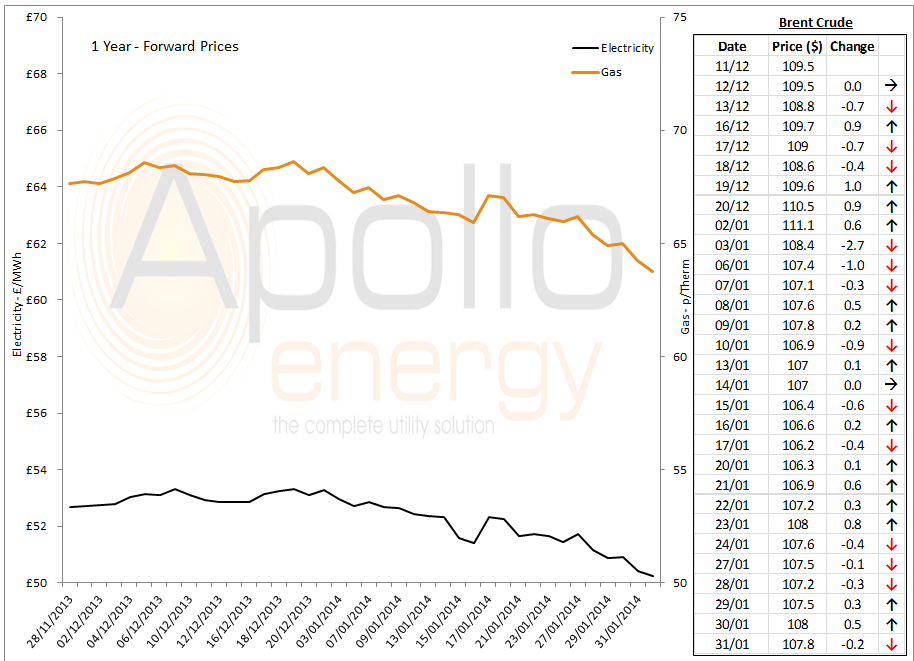