Spot power prices climbed higher yesterday following a rise in carbon costs due to the EU Parliament's decision not to oppose backloading. Prices could move higher once again today if backloading receives further support in today's conference. UK gas prices moved down yesterday as mild weather is expected until mid-February at least, while supply levels are also healthy. UK LDZ demand moved just 1mcm higher and flows via St Fergus have ramped up significantly as Norwegian output was around 325mcm this morning. Gas prices could fall further today as a drop in oil prices is expected. Today's prices can also be found in an easy to read table on our 'current UK energy price' page.

Gas prices decreased yesterday with Day-Ahead recording a 0.50ppt loss, while Front-Quarter and Front-Season lost 0.70ppt and 0.20ppt, respectively. Further along the curve Winter-15 and Summer-16 showed no movement. The mild UK weather forecast and healthy storage levels were the main influences on the market. Power contracts strengthened as Day-Ahead climbed £0.70/MWh higher and Front-Month added £0.50/MWh to its price. A drop in nuclear availability helped Day-Ahead move higher, while movement further along the curve was minor with most contracts moving slightly higher despite weaker gas contracts.

Gas contracts opened at a premium this morning as a slight drop in European temperatures is expected for the next few days. Day-Ahead increased by 0.75ppt while some near-curve prices rose by as much as 0.60ppt. Linepack was slightly short at the start of the session as demand levels rose by around 10mcm, although Langeled flows managed to rise to 72mcm. Day-Ahead power was the exception to the bullish movement this morning as it lost £2.10/MWh on the back of a strong wind production forecast for tomorrow. The rest of the curve took influence from rising gas prices with quarterly contracts posting gains of up to £0.80/MWh.

Market close data has revealed that the 1-year forward price for both commercial gas & commercial electricity moved higher- closing at 63.73ppt and £50.28/MWh, respectively. This can be seen in the graph below. 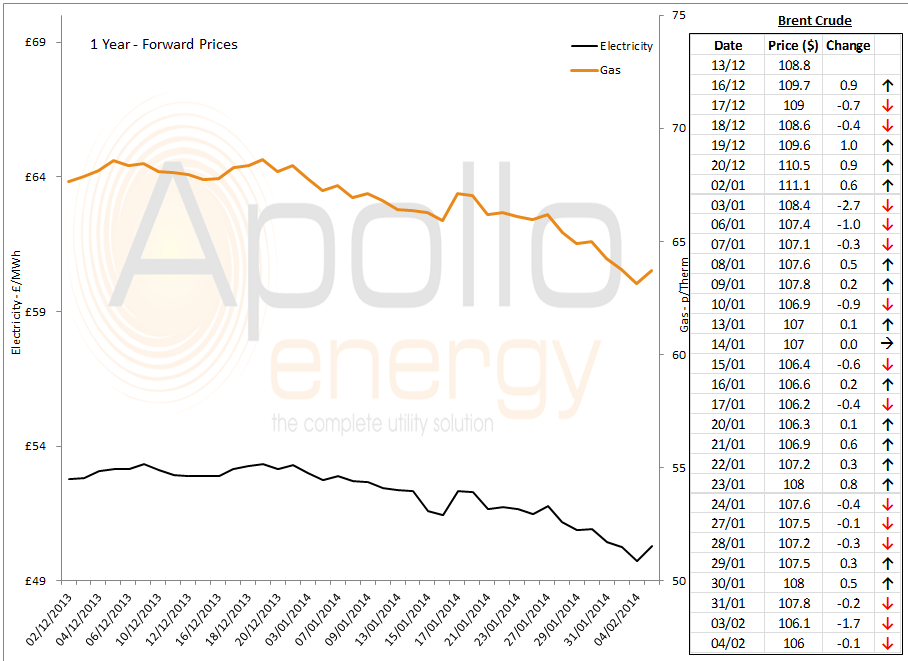 Brent 1st-nearby prices fell to $105.4/b yesterday but have moved back around $105.8/b this morning. Poor manufacturing data from the US was the main reason for the losses as WTI also fell by around $1/b.