Spot power prices have been dictated by the crisis in the Ukraine this morning, prices were rather low on Friday but a sharp rise in energy and fuel costs have had a global knock-on effect. Gas prices also displayed numerous gains on the back of the troubles in Ukraine; the price of coal in particular has climbed much higher. However the general outlook in the UK is healthy with low demand, milder weather and ample supply expected this week. Today's prices can also be found in an easy to read table on our 'current UK energy price' page.

Gas prices decreased across the curve on Friday as Day-ahead recorded a 0.15ppt loss due to an over-supplied UK gas system. Front-Month also fell by 0.30ppt as the remainder of the winter period is set to be rather mild. Winter-15 was the biggest mover and shed 0.50ppt from its price with healthy storage levels a factor. Near-curve power contracts followed a similar trend to gas and most contracts moved lower, including Day-Ahead which closed at a £1.00/MWh discount due to a healthy wind generation forecast. Further along the curve contracts moved slightly higher with the gains ranging from £0.05/MWh for Winter-15 and £0.25/MWh for Winter-14.

The gas curve displayed a series of significant gains this morning with Day-ahead rising by 5.40ppt as a consequence of on-going tensions in Ukraine. The concerns in regards to oil and gas also helped push Brent $2.00/bbl higher. The UK gas system opened nearly 20mcm short following a drop in Langeled flows and a reduction in storage withdrawals. The bulls also dominated the power curve as Day-ahead tracked its gas counterpart and opened at a £4.00/MWh premium. Prompt contracts were also supported by a drop in wind production which is expected to remain low until the end of the week.

Market close data has revealed that the 1-year forward price for both commercial gas & commercial electricity made significant gains - closing at 64.48ppt and £51.85/MWh, respectively. This can be seen in the graph below. 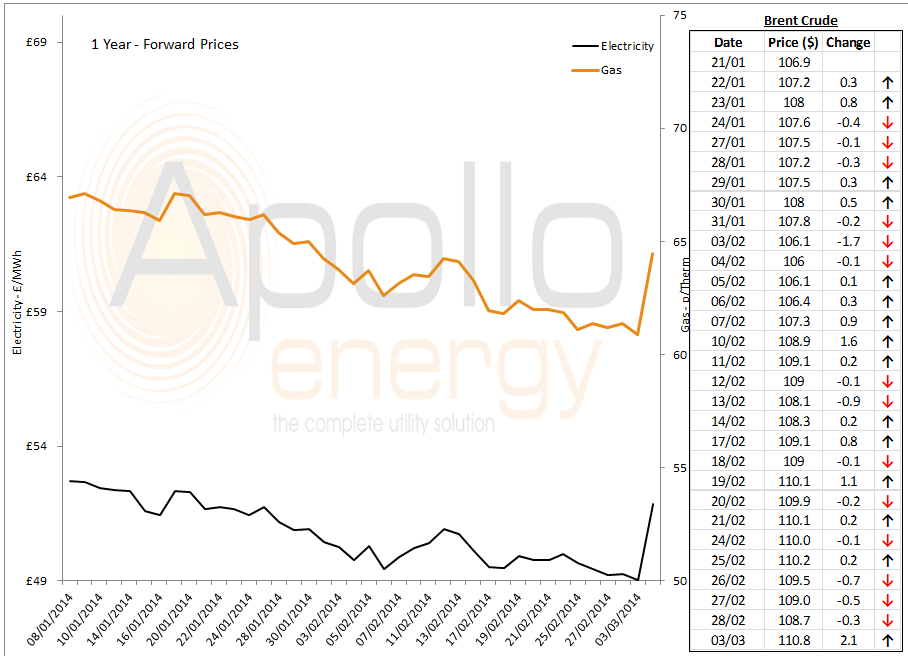 Brent 1st-nearby prices jumped $2.50/b higher this morning and currently trade at $111.4/b; its highest point so far in 2014. The increased tensions in Ukraine following Russian intervention have helped to push energy and fuel prices much higher.